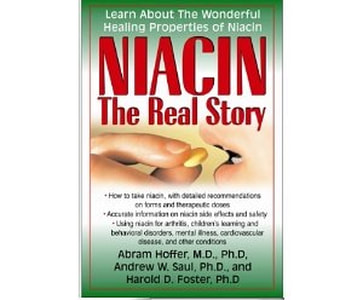 This is just a review of “Niacin: The Real Story”...

Dr. Andrew Saul's new book Niacin: The Real Story is co-written with Abram Hoffer M.D., Ph.D., who published over 600 reports and articles as well as 30 books. Dr. Hoffer's early work led to the use of niacin for schizophrenia and as an cholesterol treatment and successfully treated many thousands of patients with high doses of niacin. The authors present some very compelling evidence to support treating most psychotic disorders as a vitamin B3 deficiency.

Considering it is very inexpensive and has virtually no dangerous side effects, niacin would certainly be worth a consideration for anyone who has a family member with this mental health challenge.
I highly recommend picking up this book and learning more about its use."

The United States Patent Office delayed issuing a patent on the Wright brothers’ airplane for five years because it broke accepted scientific principles. This is actually true. And so is this: Vitamin B-3, niacin, is scientifically proven to be effective against psychosis, and yet the medical profession has delayed endorsing it.  Not for five years, but for fifty.

In 1952, Abram Hoffer, PhD, MD, had just completed his psychiatry residency. What’s more, he had proven, with the very first double-blind, placebo-controlled studies in the history of psychiatry, that vitamin B-3 could cure schizophrenia. You would think that psychiatrists everywhere would have beaten down a path to Saskatchewan to replicate the findings of this young Director of Psychiatric Research.

For everyone “knows” that vitamins do not cure “real” diseases.

Dr. Hoffer consistently said otherwise. His central point has been this: Illness, including mental illness, is not caused by drug deficiency. But much illness, especially mental illness, may be seen to be caused by a vitamin dependency. This makes sense, and has stood up to clinical trial again and again. If you do not believe this, Niacin: The Real Story will provide you with the references to prove it. And remember that it was Dr. Hoffer who started off those clinical studies in the first place. In 1952.

But the truth will out eventually. Here is an example of how niacin can really help: One patient, a bona fide, properly-diagnosed, utterly-incurable, State-hospitalized schizophrenic patient, would not see niacin work in the hospital, of course. No, the patient was a fellow whose parents were desperate enough try anything, even nutrition. Perhaps this was because their son was so unmanageably violent that he was kicked out of the asylum and sent to live with them.

On a good day, his Mom and Dad somehow got him to take 3,000 milligrams of niacin and 10,000 mg of vitamin C. Formally a hyperactive insomniac, he responded by sleeping for 18 hours the first night and becoming surprisingly normal within days. It was an astounding improvement.  Another one of niacin's properties is its ability to reduce harmful cholesterol levels in the bloodstream. Dr. Hoffer explains: "Niacin is the best substance for elevating high density lipoprotein cholesterol (the "good cholesterol) and so decreases the ratio of the total cholesterol over high density cholesterol."

Yet another feature of niacin is that it dilates blood vessels and creates a sensation of warmth, called a "niacin flush."  This is often accompanied with a blushing of the skin. It is this "flush" or sensation of heat that so many people are confused about. Dr. Hoffer writes: "With larger initial doses, the flush is more pronounced and lasts longer," says Dr. Hoffer. "But with each additional dose, the intensity of the flush decreases and in most patients becomes a minor nuisance rather than an irritant.

Niacin should always be taken immediately after finishing ones meal."

Niacin is a vitamin, not a drug. It is a nutrient that everyone needs each day. Different people in different circumstances require different amounts of niacin. Says Dr. Hoffer: "A person's "upper limit is that amount which causes nausea, and, if not reduced, vomiting. The dose should never be allowed to remain at this upper limit.

The usual dose range is 3,000 to 9,000 milligrams daily divided into three doses,

but occasionally some patients may need more. The toxic dose for dogs is about 5,000 milligrams per 2.2 pounds (1 kilogram) body weight. We do not know the toxic dose for humans since niacin has never killed anyone."

And what about that "niacin flush"?

"Most people flush at the beginning and gradually get adapted to it unless they stop for a few days and then resume it. A few cannot ever get used to it, and they take the no-flush preparations. But the intensity of the flush is very variable. Generally people who need it the most flush the least.

That includes arthritics, schizophrenics, and elderly people with cardiovascular problems. Some schizophrenics do not flush until they get well and then they do. But the presence of the flush or its intensity can not be uniquely used measure the need as there are too many variables such as food in the stomach, whether the drink with it is hot or cold, the kind of food, other medication. Antipsychotics reduce the intensity of the flush as do aspirin and antihistamines.”

Here are some more "flush" facts:

1) As mentioned above, the more ill you are, the more niacin you can hold without flushing. In other words, if you need it, you physiologically soak up a lot of niacin. Where does it all go? Well, a good bit of it goes into making nicotinamide adenine dinucleotide, or NAD. NAD is just about the most important coenzyme in your body.  It is made from niacin, as its name implies.

2) Niacin is also works in your body as an antihistamine. Many persons showing psychotic behavior suffer from cerebral allergies. They need more niacin in order to cope with eating inappropriate foods. They also need to stop eating those inappropriate foods, chief among which are the ones they may crave the most: junk food and sugar.

3) There is a chemical found in quantity in the bodies of schizophrenic persons. It is an indole called adrenochrome. Adrenochrome (which is oxidized adrenalin) has an almost LSD-like effect on the body. That might well explain their behavior. Niacin serves to reduce the body’s production of this toxic material.

In Niacin: The Real Story, Dr. Hoffer clearly presents the practical details of niacin treatment. Inevitable physician skepticism, and questions about niacin's proven safety and effectiveness, are thoroughly addressed in this book. This is NOT a biochemistry textbook, however. Let's be honest: to most of us, that is a relief. But when even a basic working knowledge of niacin can profoundly change so many patients for the better, this vitamin becomes very interesting very quickly.

Dr. Hoffer treated thousands and thousands of such patients for over half a century. He saw medical fads come and go. What he focused on is what he’s always seen: very sick people get well on vitamin B-3. Niacin: The Real Story is Dr. Hoffer's final, ultimate work. In it, he tells you, in detail, exactly how to use it to get results.

NIACIN: THE REAL STORY IS AVAILABLE FROM ANY INTERNET BOOKSELLER.
It is not for sale at this website.

Introduction: Why Should You Read This Book?
Chapter 1. What Is Niacin?
Chapter 2. How Niacin Therapy Began
Chapter 3. How Niacin Works, and Why We Need More of It
Chapter 4. How to Take Niacin
Chapter 5. Safety of Niacin
Chapter 6. Pandeficiency Disease
Chapter 7. Reversing Arthritis with Niacinamide: The Pioneering Work of William Kaufman, M.D., Ph.D.
Chapter 8. Children’s Learning and Behavioral Disorders
Chapter 9. Mental Illness
Chapter 10. Cardiovascular Disease
Chapter 11. Other Clinical Conditions That Respond to Niacin
Conclusion
Appendix: The Introduction of Niacin as the First Successful Treatment for Cholesterol Control, by William B. Parsons, Jr.

Andrew Saul is the author of the books FIRE YOUR DOCTOR! How to be Independently Healthy (reader reviews athttp://www.doctoryourself.com/review.html )

and DOCTOR YOURSELF: Natural Healing that Works. (reviewed at http://www.doctoryourself.com/saulbooks.html )

Forms and Benefits of Niacin

Niacin comes in several forms, including niacinamide and standard "fast-release" niacin. They both help to increase cellular NAD, an essential metabolic molecule for all life, but significantly, only niacin can raise HDL (good cholesterol) more than any statin while simultaneously lowering VLDL (very low-density lipoprotein), triglycerides (a risk factor for atherosclerosis), and total cholesterol.

These outcomes are commonly desirable in most high risk cardiovascular disease patients. However, niacin has also been shown to elevate NAD more than niacinamide in many cell types, making niacin superior to niacinamide for helping to prevent disease.

A problem for some people is that niacin can cause the well-known side-effect, the "niacin flush." This temporary (30-60 minutes) sometimes itchy redness of the skin occurs in some people after taking large therapeutic doses. Yet on the whole, the niacin flush is associated with beneficial health effects. Niacin specifically activates the high affinity G-protein coupled receptors, GPR 109 a and b, which then leads to release of a variety of prostaglandins that results in the flush response. This effect of niacin that causes vasodilation and the flush is widely understood to correct dyslipidemia. Although some people describe the niacin flush as a side effect, it means that the body is correcting its lipid metabolic lipid pathways which may be important in preventing atherosclerosis.

Other forms of niacin, such as slow or extended-release niacin, will not cause a flush but may also be less effective in prevention or treatment of atherosclerosis. Further, in some people slow release or non-flush niacin can result in an alarming increase in liver enzymes. Although in most accounts the niacin flush is associated with beneficial effects, it is perceived as uncomfortable by some people. For those who want to use niacin but avoid a flush, it is straightforward to find the largest dose that provides a minimal flush response. Niacin hardly ever causes a serious adverse response, but rather the response is temporary and at worse mildly uncomfortable.

How to Obtain the Benefits of Niacin

Niacin is one of the B vitamins, and like other B vitamins is an essential nutrient required for cellular energy metabolism. It is available from a wide variety of foods, including whole grains, fresh fruits and vegetables, meat and fish, and beans and nuts. As an inexpensive and safe supplement, niacin is widely used for its effects on increasing HDL (good cholesterol) to lower cardiovascular risk, to prevent the pain and inflammation of arthritis, and to treat a variety of psychological disorders including anxiety and alcoholism. When used appropriately, niacin is very safe.

To obtain the benefits of supplemental niacin without the niacin flush, you can start by taking niacin at a low dose once a day and slowly increase the dose day by day. This allows the body to adapt to the increasing doses, which largely prevents a flush.

Gradually increase the dose over the next few weeks. Using this method, it is possible to achieve a dose of several hundred mg of niacin, taken as divided doses with meals, without noticeable flushing. If an occasional niacin flush occurs, reduce the dose by a small amount. You naturally should consult with your physician to discuss appropriate forms, cautions, doses, and benefits of niacin.