for this terrible scam that is occurring everywhere.

​No real fleet support if issues happen, left to your own on that. 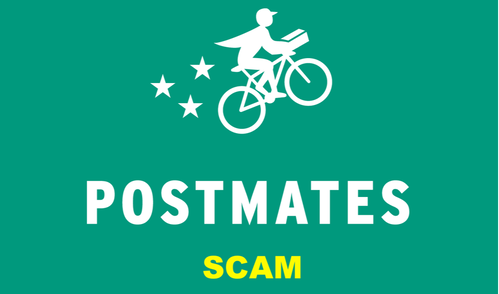 putting in an order for the sole purpose of being able
​
to talk to the driver on the phone,

pretending to be Postmates employees,

and getting the driver to reveal his or her login and password.

4 Postmates Scams to Watch Out For

This is the most common scam faced

Customer Picks Up Food Before You.

Postmates is a fraud and needs to go out of business | Indeed ...www.indeed.com

I fell for the Postmates SCAM (STORY TIME)

Postmates workers are getting scammed out of their earnings ...

Drivers delivering for Postmates have faced an uptick in phishing attempts that,

when successful, can drain their account of all the money ...

Postmates Employee is the Victim of a Fraud Scheme That ...www.nbclosangeles.com

Postmates refuses to take responsibility for a phishing scam that is occurring within their marketplace and has not notified their workers of these malicious activities which are being successfully executed and resulting in workers’ earnings being stolen within the platform.
I fell victim to the scam after being contacted by someone claiming to be a Postmates employee while I was on a delivery.

The person made off with my information and stole over $150 from my account, and Postmates refuses to reimburse me. After I reported it to Postmates, they quickly pointed out that it was a phishing scam. Why did they not warn us of this happening within their marketplace?

Postmates does not have the proper two-step authentication measures in place or their system is flawed because this person was able to lock me out of my account and cash out all my earnings. This should have never happened.

Postmates will not give me a landline to call and has since ignored emails of me trying to recover my money. If they had sent out a notice of this happening and that they were aware of it, this would have been prevented, but instead, this company would rather their workers suffer and have their hard-earned money stolen knowing that they will not cover any losses.

Postmates is a fraud and is not being regulated properly. They are screwing over their workers and their customers. Search Reddit and BBB, and you will read hundreds of stories of people being screwed by Postmates. They think that they are invincible, but their demise is just around the corner. They can try to hide behind their email-only communications, but the truth is out there of how fraudulent their business practices are.

​Run as far as you can away from this company because they do not care about their customers or workers who are the very reason they exist. They would rather take as much as they can from you and flick you off when an issue arises. Do not work for this company or give them business. You will lose more than you gain. -
​☀︎
Postmates Fleet Scam!

Last night I was driving and got a delivery from Jack in the Box for a value fry. I thought it was kinda weird, but I’ve given people random things like that before.

Right as I got to the window to pay, I got a call from (210) 871-9460. I didn’t recognize the number, so I didn’t answer. They called three more times and I had declined two. I finally answered and the call went like this:

“Hi (my name), this is (forgot lol), I’m with Postmates Fleet. I just wanted to let you know that you need to cancel the order because the customer used a stolen card.”

Me to the cashier “hold on.” guy keeps talking. Me to guy “hold on.” Me to cashier explained why I’m cancelling. Cashier “okay, have a goodnight” Back to guy on the phone:

“Yea, so I need you to go into your app & cancel the order. We will give you a $9 credit for driving there (I did drive pretty far). What’s your phone # and how much is on your fleet app?”
I pretended to cancel the order bc I got Sprint lol and there’s no internet on the phone
“Did you cancel it? It shows you’re still online with the order.”

Oh, no let me see

“Do you have Sprint?”

“I’m going to call you back in a few minutes to give you time to cancel. You can’t do it while on the phone.”

I was so confused, but I never got the money, so on my next order, I called Fleet to see why I didn’t get it.

I’ll summarize the convo bc it was super long. She basically said it was a scam and that they would never ask me questions like that, if someone used a stolen car, it’d be an internal issue and they would cancel it on their end not call the driver, why would they credit me if the customer used a stolen card? (She did say they do sometimes give credit, but it isn’t called that and that it’s only be $0-2. ) She said if I had more money on my acct, they would’ve asked for my login info and taken my money.

I still had an order, but I had pulled over and the customer had texted about 10 mins into the phone call. I finally hung up after 16 mins and explained what happened to the customer. He totally understood which I was happy about.

Anyway, BE CAREFUL! I never have had anything weird happen to me, but there’s a reason why they say there’s a first time for everything lol.
​☀︎
​​​​☀︎

A food delivery driver for Postmates

was the victim of a terrible fraud that left his bank account empty.

In the days when so many people ...

A customer wouldn't cooperate with a

Postmates delivery driver he believed was scamming him.

The delivery went awry when the restaurant ...

HOW TO USE POSTMATES DRIVER