GMO wreaking more havoc on our health than we will ever know.

Genetically Modified Foods are making more noise, this time it’s because GM foods might be responsible for a wide variety of gluten-related disorders.

The Institute for Responsible Technology (IRT) released a report proposing a link between genetically modified (GM) foods and gluten-related disorders. In the report, a team of experts suggests that GM foods may be an important environmental trigger for gluten sensitivity, which is estimated to affect as many as 18 million Americans.

– Damage to the intestinal wall

The Institute for Responsible technology is a world leader in educating policy makers and the public about GMO foods and crops. The institute reports and investigates on the impact GM foods can have on health, environment, agriculture and more.

Smith mentions that that Bt-toxin, glyphosate and other components of GMOs are linked to five conditions (as mentioned above) that initiate or exacerbate gluten-related disorders. The Bt-toxin in GM foods was designed to kill insects by puncturing holes in their cells. It’s present in GM corn and survives human digestion. A 2012 study published in The Journal of Applied Toxicology determined that these toxins can be harmful to human cells as well, and do them same as they do to insects. More studies have deemed these toxins to be responsible for killing human kidney cells.(3)(4)

Although wheat has been hybridized over the years, it is not a genetically modified organism (GMO), which can only be created by a laboratory process that inserts genetic material into plant DNA. There are nine GMO food crops currently being grown for commercial use: soy, corn, cotton (oil), canola (oil), sugar from sugar beets, zucchini, yellow squash, Hawaiian papaya, and alfalfa.

Most GMOs are engineered to tolerate a weed killer called glyphosate (Roundup®). They contain high levels of this toxin at harvest. Corn and cotton varieties are also engineered to produce an insecticide called Bt-toxin. The report focuses primarily on the effects of these two toxins. 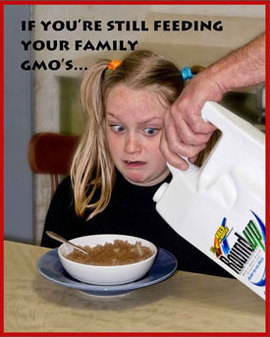 "The Bt-toxin in corn is designed to puncture holes in insect cells, but studies show it does the same in human cells. Bt-toxin may be linked to leaky gut, which physicians consistently see in gluten-sensitive patients.”

Here is a study that shows how Bt toxins found in Monsanto crops can be damaging to red blood cells, and potentially cause leukemia. Here is another one that shows how GMO animal feed caused severe stomach inflammation and enlarged uteri in pigs.

There have been multiple studies linking GMOs to cancer, and a range of other diseases. Scientists all over the world have come together to show their support for the ban of GMOs.  Mary Waldner, founder of Mary’s Gone Crackers®, a Non-GMO Project verified and gluten-free certified food manufacturer, says,

“I’m excited by the research that offers an explanation for the dramatic increase in gluten-related disorders. I encourage everyone to avoid GMOs in their diets. I have always been concerned about the effects of GMOs and Mary’s Gone Crackers has never used GMO ingredients in our products .”

Although some experts do not agree, Dr. Tom O’Bryan, internationally recognized expert on gluten sensitivity and Celiac Disease, says, “The introduction of GMOs is highly suspect as a candidate to explain the rapid rise in gluten-related disorders over the last 17 years.” Internist, Emily Linder MD, says,

“Based on my clinical experience, when I remove genetically modified foods as part of the treatment for gluten sensitivity, recovery is faster and more complete. I believe that GMOs in our diet contribute to the rise in gluten sensitivity in the U.S. population.”

Article by Arjun Walia and originally from Collective Evolution.