Protein, fat, cholesterol, methionine (a sulfur-containing amino acid), and dietary acids, which are all superabundant in animal foods, are poisoning nearly everyone following the standard Western diet.

China Says No to US Pork Due to Feed Additives

American pork producers face giant financial damages, as China has banned the importation of meat produced with the use of a popular growth hormone which is widespread in the US. Europe will deliver more pork to China this year than the US despite the latter being considered a world leader in the export of pig products, Robobank reported.

​The reason is simple — Beijing has banned a growth-inducing hormone which is fed to 80 percent of hogs in the US, according to Bloomberg.

Protein, fat, cholesterol, methionine (a sulfur-containing amino acid), and dietary acids, which are all superabundant in animal foods, are poisoning nearly everyone following the standard Western diet.

Most people cannot fathom this, because it takes four or more decades of consumption before disability, disfigurement, and death become common from these endogenous toxins. This long latent period fools the public into thinking there is no harm done by choosing an animal-food-based diet.

If the case were one of instantaneous feedback—one plate of fried eggs caused excruciating chest pains, paralysis from a stroke followed a prime rib dinner, or a hard cancerous lump appeared within a week of a grilled cheese sandwich—then eating animal foods would be widely recognized as an exceedingly unwise choice.

Similar failures to appreciate slow poisonings from our lifestyle choices are seen with tobacco and alcohol use. If one package of cigarettes were followed by a week on a respirator or a bottle or two of gin caused hepatic (liver) coma then no one would indulge in these instruments of long-drawn-out death either.

The difference defining the failure to take long overdue actions is that the dangers from tobacco and alcohol use are universally known and accepted, whereas almost everyone considers red meat, poultry, eggs, and dairy products necessary parts of a healthy diet.

The Art of Selling Slow Poisons: Distract the Consumer

Sellers of animal foods for human consumption draw in customers with the marketing strategy of “unique positioning”—each industry tries to make its merchandise stand apart from other foods by promoting a nutrient that is especially plentiful in its product.

Over time this effective advertising approach has meant that the mention of calcium brings to mind milk and cheese, iron has become synonymous with beef, and eggs are well known as the “best source of high quality protein.”

Because these highly sensationalized nutrients are always plentiful in basic plant foods, illnesses from deficiencies of these nutrients are essentially unknown, as long as there is enough food to eat. Thus, there are no real nutritional advantages to choosing red meat, poultry, dairy, and egg products with an especially high density of one particular nutrient. Ironically, milk and cheese are iron deficient, and red meat, poultry, and eggs (unless you eat the shells) contain almost no calcium.

Focusing on the abundance of an individual nutrient accomplishes an even more insidious marketing goal; it diverts the consumer’s, and oftentimes the professional dietitian’s, attention away from the harmful impact on the human body of consuming all kinds of animal foods.

In my 42-years of providing medical care I have never seen a patient sickened by eating potatoes, sweet potatoes, corn, rice, beans, fruits, and/or vegetables (unspoiled and uncontaminated).

However, during my everyday practice I have witnessed (just like every other practicing medical doctor has) a wide diversity of diseases, including heart attacks, strokes, type-2 diabetes, arthritis, osteoporosis, and cancer, from eating fresh killed and/or collected, as well as processed and/or preserved, animal-derived foods.

A Simplified View of Animal-food Poisoning

Animal foods—be they from cow, pig, or chicken muscles or the ovum of a bird or the lactation fluids of a mammal—are all so similar in their nutritional makeup and their impact on human health that they should be considered as the same (see the comparison tables at the end of this article).

In order to avoid the confusion created by the marketing strategy of “unique positioning,” lets look at different kinds of animal products mixed together to make one food; and compare them to their antithesis, starches.

If I were to blend together red meat, chicken, eggs, and cheese, which most Americans do three or more times a day in their stomachs, the end product would be a highly acidic mixture of mostly protein, fat, and water—each individual food having contributed a similar amount of each component. A blend of various starches—beans, rice, potatoes, and sweet potatoes—would produce an opposite in composition.

The Five Overloads from Animal Foods that Poison Us

Protein, fat, cholesterol, sulfur-containing amino acids (methionine, for example), and dietary acids poison us when consumed in amounts that exceed the body’s metabolic capabilities to detoxify and eliminate the excesses. Compared to the proper human diet, animal foods burden us with

Furthermore, the toxic effects of these poisons are interactive. For example, excesses of protein, methionine, and dietary acids work together to destroy the bones. Excesses of dietary fat and cholesterol combine their deleterious effects to damage the arteries (atherosclerosis) and promote cancer. Let me provide some more details on how these five destructive elements from animal foods ruin your health.

Once your protein needs are met then the excess must be eliminated from your body, primarily by your liver and kidneys. You can notice an overload of protein by the strong smell of urea in your body sweat and urine. The work of eliminating excess protein takes a toll even on healthy people.

On average, 25% of kidney function is lost over a lifetime (70 years) from consuming the high animal-protein Western diet.(1,2) For people with already damaged livers and kidneys, consuming excess protein will speed up the processes that lead to complete organ failure.3-7 Excess protein damages the bones. Doubling the dietary intake of protein increases the loss of calcium into the urine by 50%, fostering the development of osteoporosis and kidney stones.8

The most recent report (for 2007 to 2008) on the epidemic of obesity in the US finds 33.8% of adults obese with 68.0% of all adults overweight.(9) Dietary fats are almost effortlessly stored in your body fat.(10) When consumed in excess, dietary fats also result in a surplus of fats stored in your liver, heart, and muscles.

From all this over-accumulation, insulin resistance develops, contributing to other health problems, including heart disease, strokes, and type-2 diabetes.11 The extra pounds you carry around cause damage to the joints of your lower extremities (osteoarthritis).

Excess fat in your diet and on your body alters your cellular metabolism, promoting cancers by many already discovered mechanisms.12

Cholesterol is only found in animal products. As an animal, you make all the cholesterol you need. Unfortunately, your capacity to eliminate it is limited to a little more than the amount you make.

As a result, the cholesterol added by eating animal foods accumulates in your body parts, including your skin, tendons, and arteries. Cholesterol deposited in your arteries is a major contributor to vascular diseases of your heart and brain.13 Cholesterol also facilitates cancer development.14

Sulfur feeds cancerous tumors and is known to be toxic to the tissues of the intestine. Sulfur-containing amino acids are metabolized into sulfuric acid—one of the most potent acids found in nature.

After ingestion, your body must neutralize the over-abundance of endogenous dietary acids in the animal foods you eat. Your bones are the primary buffering system of your body.16-20 They counteract these dietary acids by releasing alkaline materials (carbonate, citrate, and sodium)—thereby the bones dissolve. Acids from animal foods also raise cortisol (steroid) levels in your body.21 An excess of steroid is another mechanism for further bone loss. The net result from this chronic acid poisoning is kidney stones and osteoporosis.

Detoxifying with a Healthy Nutrition

Simply by making the right food choices you will immediately relieve yourself from the burden of five dietary poisons inherently found in animal foods. At the same time you will be reducing your intake of pesticides, antibiotics, and other toxic chemicals found in high concentrations in most animal foods.

You will also be adding generous amounts of complex carbohydrates, dietary fibers, alkaline substances, and a healthy balance of vitamins, minerals, and essential phyto-chemicals to your body. And finally, you will be avoiding exposure to animal-borne, infectious microbes (bacteria, viruses, parasites, and prions) that can cause acute and deadly illnesses. 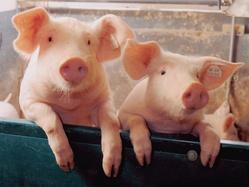 DRUG BANNED OR RESTRICTED IN


Pig farmers in the United States have continued to feed a controversial drug to their livestock, choosing production needs over human and animal health concerns, according to critics.

The drug is ractopamine, which is given to 60% to 80% of all domestic pigs and cattle to make them grow leaner before slaughter. The Food and Drug Administration first approved it 15 years ago, claiming the drug was safe to use.

But food safety advocates disagree with this claim and the assertions of farmers who rely on the product made byElanco, a division of drug maker Eli Lilly. They point out that 160 countries have either outlawed the drug or limited its use, while also noting the existence of 160,000 reports of pigs becoming ill or dying after being fed ractopamine.

The nonprofit Center for Food Safety cited information from the European Food Safety Authority showing ractopamine can cause increased heart rates in humans.

This symptom is similar to the drug’s effect on pigs, which experience elevated heart rates and relaxed blood vessels. These changes result in leaner muscles in the animals, which don’t eat as much food while on the drug, saving farmers money on feed

The Humane Society Institute for Science and Policy has reported that studies show pigs fed ractopamine can have trouble walking, become more aggressive, and experience other abnormal behavior.

As concern in the U.S. grows over the safety of domestic pork—as well as that of other foods, including chicken, which is disinfected with chlorine by American food producers—an expanded trade deal between the U.S. and the European Union(EU) hangs in the balance. Given the EU’s ban of ractopamine and U.S. chickens, the new trade pact could be in trouble. The U.S. government has put pressure on Europe to allow such foods to be imported, but the EU has been firm.

“We want to have quality food,” Olga Kikou, European affairs manager for Compassion in World Farming, told McClatchy. “We don’t want to have food that is produced in ways that are not good for our health.”

“This is such a great example of how the U.S. is really putting the financial interest of companies ahead of public health,” Kari Hamerschlag, senior program manager of the food and technology program at Friends of the Earth, said to McClatchy. “We want to export our really crappy meat-production system to the rest of the world—and they don’t want it.”-Noel Brinkerhoff, Danny Biederma

US Pork Producers' Use of Drug May Derail European Trade Deal (by Rob Hotakainen, McClatchy)

U.S. Pig Farmers Use Drug Banned in China as Unsafe (by Noel Brinkerhoff and David Wallechinsky, AllGov)﻿
​References: for the Five Major Poisons in Animal Foods

5) Pedrini MT. The effect of dietary protein restriction on the progression of diabetic and nondiabetic renal diseases: a meta-analysis. Ann Intern Med. 1996 Apr 1;124(7):627-32.

17) Frassetto L.Diet, evolution and aging--the pathophysiologic effects of the post-agricultural inversion of the potassium-to-sodium and base-to-chloride ratios in the human diet. Eur J Nutr. 2001 Oct;40(5):200-13.