​This enzyme that our body produces causes all of the problems.

to produce this enzyme.

It may surprise you that of the ten leading causes

of death in the USA

- including heart disease, cancer, and diabetes -

seven are linked to a single enzyme in your body ...

Seven of the leading causes of death in the US, including heart disease and cancer,
have been linked to an enzyme produced in the body called 5-lipoxygenase or 5-LOX.

A superior form of a natural 5-LOX inhibitor has been developed that absorbs into the blood 52% better than previously available extracts.

🌸
It may surprise you that of the ten leading causes of death in this country—including heart disease, cancer, and diabetes—seven are linked to a single enzyme in your body.1

It's called 5-lipoxygenase or 5-LOX and in excess can create a cascade of dangerous inflammatory conditions throughout your body.

With these diseases now largely eradicated, the pro-inflammatory action of 5-LOX is not only unnecessary, but lethal to aging humans.2-5

Long known to researchers for its role in arthritis, pharmaceutical companies are trying to develop safe drugs to defuse 5-LOX, but the few "5-LOX inhibitors" currently available are proving no safer than other anti-inflammatory drugs.6,7

The good news is that a superior form of a natural 5-LOX inhibitor has recently been developed. This highly purified extract of boswellia has been shown to effectively inhibit excess 5-LOX at the molecular level.

This article describes recent data on the anti-inflammatory mechanisms of boswellia extract and its multimodal protective effects against age-related problems such as cancer, heart disease, and neurodegenerative disorders.

Readers will be encouraged to discover a new extract that absorbs into the blood 52% better than previously available boswellia.

To remove arachidonic acid, the body increases production of enzymes like 5-lipoxygenase (5-LOX). Elevated 5-LOX and end products formed from degradation of arachidonic acid result in a constellation of age-related disorders.

The graphic below (Figure 1) is re-printed from the February 2007 issue of Life Extension Magazine®. It clearly shows common foods in the Western diet that cause excess arachidonic acid to accumulate and the deadly cascade caused by elevated 5-LOX.
🌸 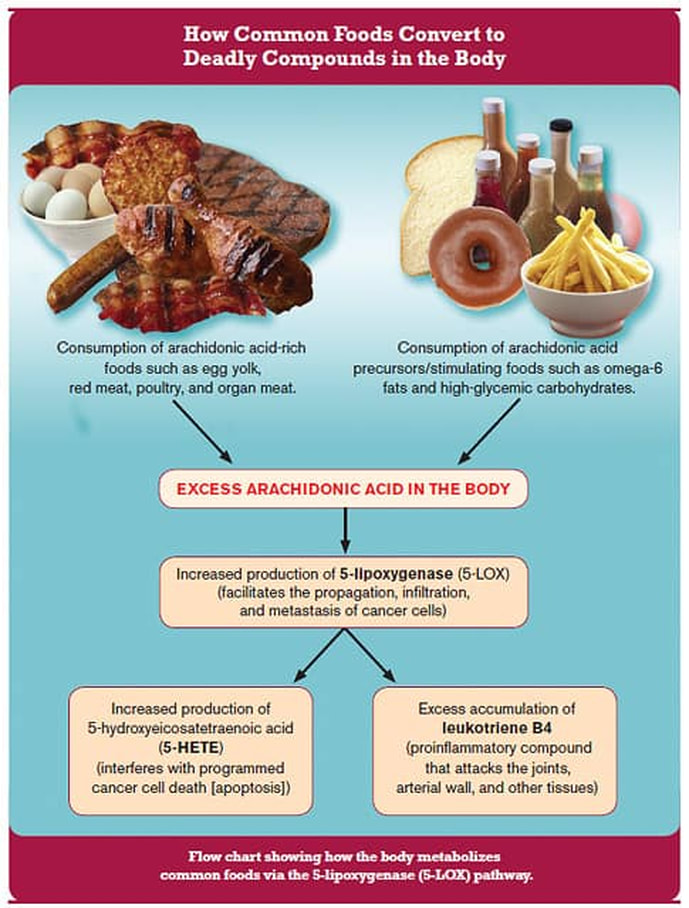 🌸
5-LOX stimulates the manufacture in the body of pro-inflammatory molecules called leukotrienes.8 Hundreds of published studies connect leukotrienes to cardiovascular disease,9 cancer,10-16 arthritis,17-19 and breathing disorders such as asthma and chronic obstructive pulmonary disease (COPD).8 They have also been implicated in Alzheimer's,20-25 inflammatory bowel diseases,26-28 and osteoporosis.29,30

Clinical Validation for a Traditional Treatment

For millennia, traditional cultures prized the fragrant leaves of the boswellia tree both as aromatics and medicinals capable of reducing fever, rheumatism, and gastrointestinal disorders.

TABLE 1: ANNUAL US DEATHS FROM
CONDITIONS RELATED TO EXCESS 5-LIPOXYGENASE1

More than 1.5 million deaths in the US are attributable to diseases in which the pro-inflammatory enzyme 5-lipoxygenase plays an important role.9,10,20,31-38

Modern researchers first validated boswellia's medical relevance with the discovery of boswellic acids. One in particular, AKBA (3-acetyl-11-keto-betaboswellic acid), was shown to bind directly to the 5-LOX enzyme in our bodies, preventing it from facilitating production of pro-inflammatory leukotrienes.39,40

A Superior Form of Boswellia

The limitation in using boswellia extracts as 5-LOX inhibitors is that they are difficult to absorb into the bloodstream (scientists call this "bioavailability").44

Recently, a novel boswellia extract was developed in which the plant's bioactive components were suspended in non-volatile oil also derived from boswellia.

Researchers found this extract to be 52% more bioavailable compared to standard boswellia extracts.44

Clinical studies of patients with osteoarthritis are already confirming the important improvements in effectiveness offered by the new formulation.45 This makes sense based on a wealth of data showing life-enhancing benefits that boswellia extracts can afford through their blockade of dangerous 5-LOX and other mediators of inflammation.

For more than 20 years, we have known of the major role played by inflammation in the development of atherosclerosis, which is the occlusion and hardening of the arteries.

In 1991, it was discovered that end products of 5-LOX were involved in the formation of atherosclerosis.52,53

DiseaseNumber of Sufferers in the US
(% of Adult Population)

Within a decade, the hunt was on for 5-LOX inhibitors that could prevent or even reverse cardiovascular aging.54 Boswellia extracts emerged as the most prominent natural sources of 5-LOX-inhibiting, anti-atherosclerotic compounds.55

In vascular tissue, boswellia extracts exert multiple complementary effects. They possess powerful free radical–quenching effects.56 Boswellia extracts lower total cholesterol by up to 48% and boost artery-cleansing high-density lipoprotein (HDL) by as much as 30%.57

It is boswellia extracts' inhibition of 5-LOX and other inflammatory factors, however, which is generating intense interest among heart specialists. In human capillary lining (endothelial) cells, the extracts significantly prevented expression of specific molecules central to forming atherosclerotic lesions.43,58 Boswellia exerted this effect by favorably modulating 113 genes, all of which were involved in producing blood vessel inflammation.58,59

Extracts rich in AKBA, a key bioactive agent in boswellia, caused a 50% reduction in the size of atherosclerotic lesions.60 They also significantly reduced activity of several different coagulation (clotting) factors in the blood.56

Constituents of a resin from a boswellia species have been shown to be potent stimulators of a brain receptor system called TRPV3 that lowers anxiety and exerts antidepressant-like effects.61

Incensole acetate specifically inhibits degeneration of brain cells in the hippocampus, the region responsible for memory processing.62 Animal models confirm this effect. Laboratory rats treated with a drug to impair memory, along with boswellia extract, performed significantly better on tests involving spatial orientation and learning than did animals treated with the drug alone.63

A similar result was shown in healthy animals not treated with a memory-destroying drug. Extracts of Boswellia papyrifera—one of five species of boswellia used in the making of frankincense—increase spatial memory retention, enabling the animals to quickly find their way out of a maze.64

AKBA, a principal component of boswellia, acts by numerous mechanisms to prevent cancer cells from proliferating. It induces apoptosis, or programmed cell death, by switching on the aptly named "death receptor" on cancer cell surfaces, an effect accompanied by activation of so-called "suicide" pathways inside cancer cells.65

Finally, AKBA has recently been shown to suppress activity of a cellular receptor, CXCR4, that cancer cells use to trigger the metastases that account for 90% of cancer deaths. To date, boswellia extracts have also shown promise in reducing malignant cell growth, replication, or metastases in cancers of the prostate, bladder, cervix, colon, as well as in multiple myeloma, a cancer of the bone marrow. 66-73

Early studies involved combinations of boswellia extracts with other known natural anti-inflammatory agents such as Withania somnifera (ashwagandha), Curcuma longa (curcumin), and zinc. In one such study, 42 patients were randomly assigned to receive this combination of nutrients or a placebo for 3 months.85

The treated group, but not the placebo recipients, demonstrated a significant drop in pain severity and disability scores. A similar study included the widely used WOMAC score of physical function difficulty and demonstrated significant reductions in that parameter as well as in pain and disability.86 No significant side effects were noted in either study.

Situated entirely around the male urethra, which leads urine out of the bladder, the slightest swelling of the prostate creates a potential blockage. Even when the swelling is non-malignant, as in the case in benign prostatic hypertrophy, or BPH, the results can range from mild discomfort to downright misery.

The use of plant extracts for prostate health is an ancient and well-developed practice.74 Several extracts in particular are known to provide impressive relief of so-called lower urinary tract symptoms.

Saw palmetto, stinging nettle, and Pygeum africanum are among the best-known plant derivatives for prostate health.75-81 When combined with pumpkin seeds and products high in beta-sitosterol and lignans, these extracts provide relief of the inflammation and tissue overgrowth found in BPH.74,82 They may also contribute to a reduction in prostate cancer risk by modulating the androgen receptor system.83,84

Studies show that boswellia extract targets the androgen receptor on cancer cells, preventing them from responding to the growth-inducing effects of testosterone metabolites and arresting prostate cell reproduction.70 This effect is amplified by a substantial reduction in the number of androgen receptors produced by the cancer cells, further limiting their ability to respond to androgenic stimuli.

More recently, studies have been conducted using boswellia extracts alone in double-blind, placebo-controlled trials, with doses up to 3,600 mg per day. Again, significant reductions are routinely reported in all parameters, including joint pain and swelling, ability to flex the joint, and increased walking distances.87

A 2008 study using a purified extract containing 30% of the vital AKBA was conducted among 70 patients with osteoarthritis.88 Subjects received the extract at doses of either 100 or 250 mg per day, or a placebo, for 90 days. Both doses of the extract, but not the placebo, resulted in clinically and statistically significant improvements in pain scores and physical function.88

Several other features of this study are worthy of notice. First, samples of joint fluid revealed a significant reduction in MMP-3 (matrix metalloproteinase-3), the inflammatory enzyme responsible for much of the cartilage destruction seen in osteoarthritis. Secondly, improvements in pain and functional ability were evident as early as 7 days into the 90-day treatment program.

A follow-up study was conducted in 2010 to evaluate the efficacy of both the standard 30% AKBA extract and the newer, more bioavailable extract.45 Patients received just 100 mg of either supplement, or placebo, again for 90 days. In this case, both supplements produced significant improvements in pain scores and function and a reduction in MMP-3 levels. In both groups, improvements were evident in only 7 days, although the highly bioavailable preparation was more effective in providing a meaningful level of joint protection.

OTHER METHODS TO SUPPRESS 5-LOX

As humans age, however, over-expression of 5-LOX in the body often necessitates aggressive measures to suppress this deadly enzyme. Specific extracts from the boswellia plant are an effective natural way of selectively inhibit 5-lipoxygenase (5-LOX)114,115 in addition to following healthier dietary patterns.

The enzyme 5-lipoxygenase or 5-LOX triggers seven of the top ten leading causes of death in the United States, including cancer and heart disease.

Excess 5-LOX leads to deadly release of pro-inflammatory molecules, including leukotrienes. While few safe drugs exist to neutralize 5-LOX, an exciting natural 5-LOX inhibitor with greater absorbability was recently developed. An abundance of compelling data indicates that the bioactive compounds in boswellia block the inflammatory response induced by 5-LOX that accelerates the onset of multiple killer diseases of aging.

This new form of boswellia has been shown to absorb 52% better into the bloodstream, thus providing more of this natural 5-lipoxygenase inhibitor to cells throughout the body.
If you have any questions on the scientific content of this article, please call a Life Extension® Health Advisor at 1-866-864-3027.

Boswellia extracts offer proven relief for the pain and joint swelling seen in osteoarthritis. The addition of several other natural supplements to a joint health formula offers substantial additional protection, especially for vulnerable cartilage, which can be destroyed by the MMP-3 enzyme produced during inflammation.

A new form of collagen has captivated arthritis experts because of its superior performance in promoting healthy joints. This proprietary ingredient is derived from chicken cartilage and is rich in type II collagen.89,90

Small oral doses of type II collagen act as an immunological "decoy," attracting inflammatory T-cells away from their attacks on human joint cartilage.90 Most commercial forms of collagen, however, are heat treated and "denatured," which limits their effectiveness.

This novel protein is "undenatured" type II collagen, which means it retains its natural 3-dimensional shape, an important characteristic in determining efficacy.90 Clinical studies have shown that this special form of type II collagen is effective in reducing pain and disability scores in human and animal sufferers with both rheumatoid arthritis and osteoarthritis.91-93

In one study, this proprietary form of type II collagen decreased the pain score by 40% and improved functional index measurements by 20% after 90 days of treatment.94 This new form of collagen has been proven safe and non-toxic in large-scale trials as well.89

Additional joint support comes from boron and glucosamine. Boron, in the form of calcium fructoborate, helps reduce inflammation by modulating multiple elements of the immune system.  95-102 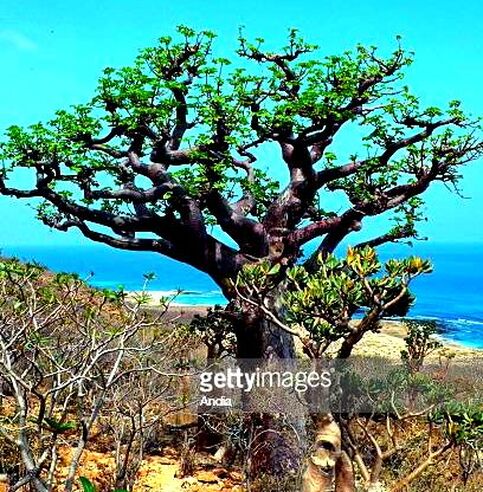 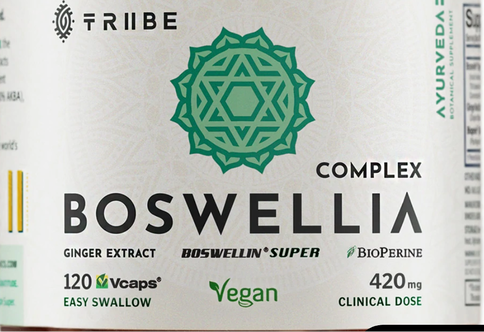