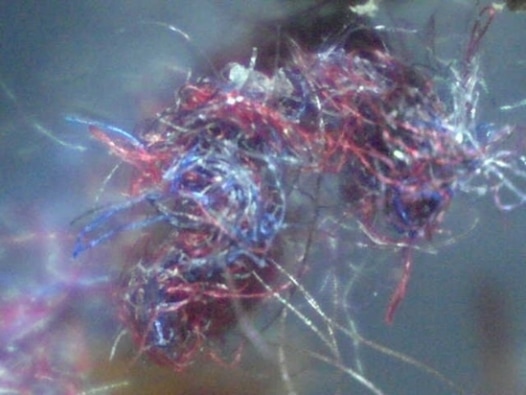 What is Morgellons Disease

Morgellons is a controversial and poorly understood condition in which unusual thread-like fibers appear under the skin. The patient may feel like something is crawling, biting, or stinging all over.

Some medical experts say Morgellons is a physical illness. Others suggest it is a type of psychosis called "delusional parasitosis," in which a person thinks parasites have infected their skin.

Your doctor may call it an "unexplained dermopathy," which means a skin condition that occurs without a known reason. Other medical professionals have dubbed the condition "fiber disease."

Symptoms of MorgellonsUnpleasant skin sensations are the main complaint. People with Morgellons may also complain of:

Some patients report thread-like fibers stuck in the skin.

People with Morgellons sometimes complain of other symptoms which may include:

There is no known cure for Morgellons. Treating any medical or psychiatric problems that occur at the same time as Morgellons may help ease Morgellons symptoms in some patients.

A team of medical researchers at the Mayo Clinic also recommend that patients with these symptoms should undergo psychiatric evaluation.

In the past, few doctors had heard of Morgellons. But in response to scattered reports, the CDC worked together with several other health care agencies to investigate this condition. Most reports came from California, Texas, and Florida, although patients have been seen in all 50 states.

The CDC study found that Morgellons is most likely to affect middle-aged white women. ... 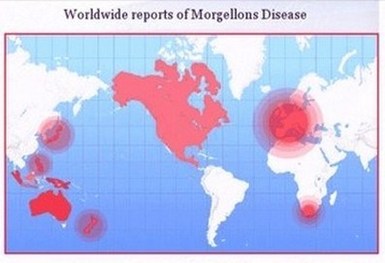 It no conicidence that Morgellons has the greatest incidence in those countries that are the most heavily chemtrailed.

YOU ARE NOW BREATHING ETHYLENE DIBROMIDE, NANO-PARTICULATES OF ALUMINUM AND BARIUM AND CATIONIC POLYMER FIBERS WITH UNIDENTIFIED BIOACTIVE MATERIAL:

“We the people have not been warned, advised or consulted but are certainly vulnerable to the outcomes.” Lightwatcher.com “Biologic components have been reported in airborne samples that include: modified molds, desiccated red blood cells and exotic strains of bacteria”

Additionally, award winning investigative reporter, Will Thomas, has reported findings of over 300 types of virally mutated fungi in the chemtrail fall out.

The Idaho Observer has reported findings of 26 metals including barium, aluminum and uranium, a variety of infectious pathogens and chemicals and drugs including 2 sedatives in chemtrail fallout, 6 bacteria, including anthrax and pneumonia, 9 chemicals including acetylcholine chloride, 26 heavy metals including arsenic, gold, lead,mercury, silver, uranium and zinc, 4 molds and fungi, 7 viruses, 2 cancers, 2 vaccines.

Dr.R. Michael Castle reports the finding of cationic polymer fibers. Others have reported findings of tiny parasitic nematode eggs of some type encased in the fibers.

Researcher Clifford Carnicom has reported finding chemtrails fibers that are an exact match with the bizarre fibers found in those suffering from Morgellons Disease. Welcome to the brave new world of toxic barium skies, weather control, mind control and population control through the use of chemtrails modulated with electromagnetic frequencies generated by HAARP.

Our health is under attack as evidenced by the skyrocketing rates of chemtrail induced lung cancer, asthma and pulmonary/respiratory problems as well as the emergence of a new plague, Morgellons Disease, an infection with a new and unknown pathogen that is seriously disabling and disfiguring. Over 12,000 families in the U.S. are now infected with Morgellons.

Our skies are increasingly hazed over with fake barium/ aluminum particulate, ethylene dibromide chemtrail clouds. Whether in the atmosphere or in the Ocean this added particulate matter is a hazard to the health of every living thing on this planet. There is a main-stream media blackout on this subject so the only way to get the word out is by word of mouth.

People are already dying because of the chemtrails. Life expectancy is down. This situation presents an immediate and serious threat to you, your family and loved ones. We must join together to stop this insane program of chemtrail spraying now. Please do what you can to help.

One aspect of the chemtrail story is becoming more and more a story about the spread of Morgellons Disease. The bizarre, unique fibers that have been found in the bodies of the Morgellons infected have been matched to fibers found in the chemtrail fallout and in rain drops. This suggests that anybody who breathes the air may have been exposed to this disease.

Researcher Clifford Carnicom has recently reported that blood abnormalities that he associates with chemtrail infection are being found in just about everyone he is testing whether or not they show the visible signs of having a Morgellons infection. “Polymer chemist Dr. R. Michael Castle has studied atmospheric polymers for years.

He has found that some of them contain bioactive materials, which can cause “serious skin lesions and diseases when absorbed into the skin.” He has identified microscopic polymers comprised of genetically-engineered fungal forms mutated with viruses. He says that trillions of fusarium (fungus)/virus mutated spores), which secrete a powerful mico-toxin, are part of the air we breathe.”

SELF REPLICATING NANO MACHINES HAVE BEEN FOUND “RUNNING WILD”

IN THE BODIES OF MORGELLONS INFECTED INDIVIDUALS

Morgellons researchers Dr Hildegaard Stanninger and Dr Karjoom have announced the finding of self replicating nano machines “running wild” in the bodies of Morgellons victims.

More stunning evidence of a Chemtrail/Morgellons connection (see photo #18); Recent microscopic examination of rainwater by researcher, Lisa Jones has revealed contamination with pathogens that have strong similarities to the Morgellons pathogen. This raindrop image shows a fiber-like lattice with a lighter colored tube that appears to contain baby Morgellons pathogens.

The “thornes” on the lattice appear to be designed to cause the organism to stick and catch on skin and clothing. The unnatural looking orangish-pink glow in certain areas of this tube look just like the unnatural appearing orange-pink glowing points that show up on many of the Morgellons organisms. Chemtrail dispersion of Morgellons would be an obvious explanation as to why this stuff is showing up in rainwater.

“Polymer chemist Dr. R. Michael Castle has studied atmospheric polymers for years. He has found that some of them contain bioactive materials, which can cause “serious skin lesions and diseases when absorbed into the skin.”

​He has identified microscopic polymers comprised of genetically-engineered fungal forms mutated with viruses. He says that trillions of fusarium (fungus)/virus mutated spores), which secrete a powerful mico-toxin, are part of the air we breathe.”

The Link Between GMOs and Morgellons Disease

Morgellons Disease sufferers report strange, fiber-like material sticking out of sores or wounds that erupt on the skin. This is accompanied by painful, intense itching, that has been described as “an ever present sensation as if something is crawling under the skin.

Very little can be found regarding this disease. Originally, sufferers were told that their problem was imaginary. This was of little comfort to the people who were suffering.

Little information has been revealed concerning the long-term health effects of GMO crops on humans or animals, and even less information can be had regarding research correlating Morgellons with GMO foods. This is suspicious right off the bat, because it would seem that there would be a natural curiosity regarding a link between Genetically Modified Organisms that people ingest regularly and inorganic fibers that protrude from a person’s skin.

This would be right up a geneticist’s alley, and quite worthy of intensive research. So, why aren’t there a ton of published studies? Why is it so difficult finding anything related to this? Could it be that companies such as Monsanto have enough clout to effectively squash these stories?

​If they have enough clout to ruin countries by deceiving impoverished farmers into purchasing patented GMO seeds, and then take it a step further and force these poor people to purchase seeds year after year instead of harvesting their own, then they have enough clout to ask our more than willing corporate government to manipulate the press…again.

Well Monsanto, you let at least one study slip through. With the help of a couple of search engines, the following article by Whitley Strieber published on October 12, 2007, titled “Skin Disease May Be Linked to GM Food” was found, which concludes that the fibers taken from a Morgellons sufferer contain the same substance that is “used commercially to produce genetically-modified plants.” (More info here.)

What you purchase from the store might just change your DNA and create such frightening symptoms that the general public simply does not believe it. What is worse is that when you go to the doctor to get help, you’re told what you are experiencing is all in your head. Remember the old saying – “you are what you eat.”