🌸
A "Mockery of Humanity"
​
Popular Restaurants

​in Las Vegas and Arizona
🌸

A Meal to Die 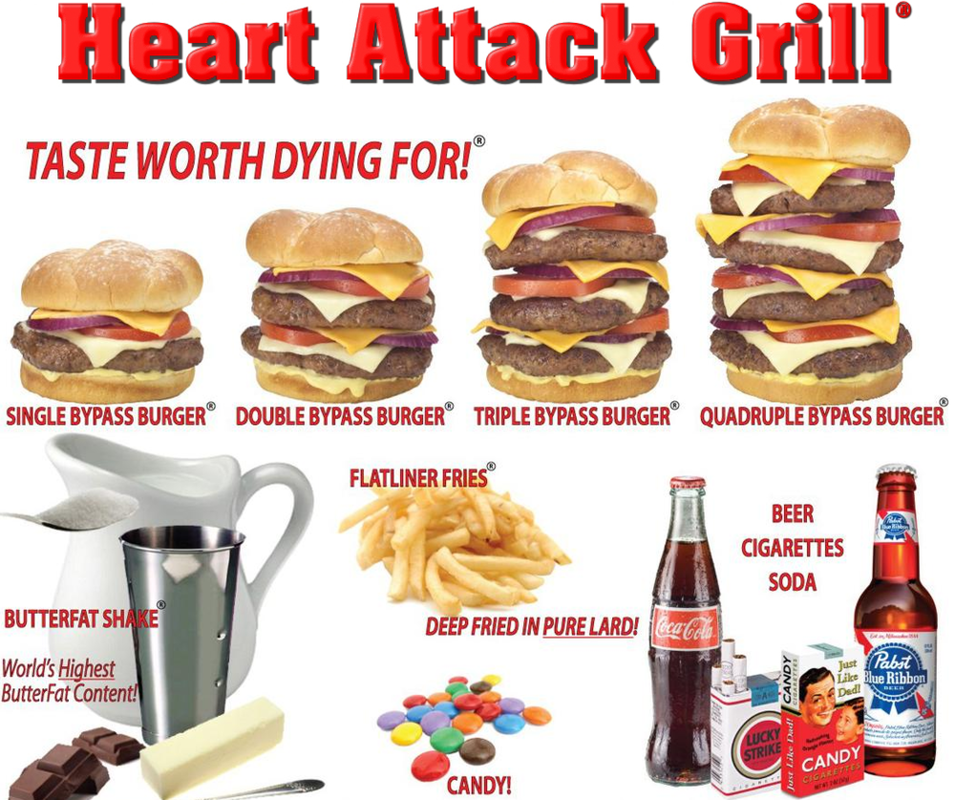 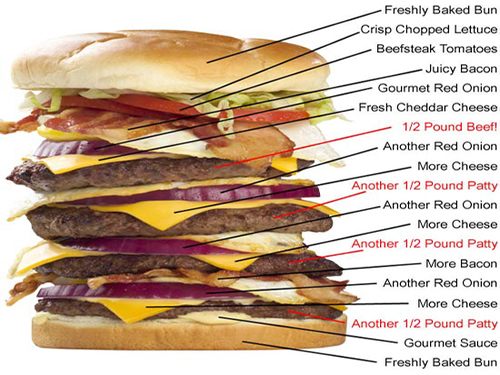 The owner of the Heart Attack Grill, an infamous Las Vegas eatery that’s been connected to two actual heart attack deaths in recent years, defended the business’s fat-shaming gimmickry Sunday night during the pilot episode of Showtime’s “7 Deadly Sins.” “I’m reflecting society,” Jon Basso explained in the episode, which focused on gluttony. “I’m only doing to [the customers] what they want me to do.”

And what the self-dubbed “Dr. Jon” does at his medically themed restaurant has shocked many: offer a menu of disgustingly unhealthy items, such as the four-stacked Quadruple Bypass Burger, topped with chili and 20 slices of bacon; weigh customers (“patients”) on a cattle scale in the middle of the room; reward those who are over 350 pounds with a free meal; and punish people who don’t finish their food with spankings delivered by scantily clad “nurses.” The restaurant’s TV spokesperson, 29-year-old Blair River, died in 2011 of issues related to his 570-pound weight. And a heart attack killed John Alleman, the restaurant’s paid mascot, as he was leaving the premises in 2013.

“It’s a sacrifice that has to be made,” Basso said on the show, created by documentarian Morgan Spurlock. “Somebody has got to stand here and say, ‘Screw it. Wake up, world. You’re fat.’ No, I’m not going to call you ‘plus-size.’ I’m not going to say you’re ‘portly.’ No, you’re fat. Lose some weight, or just hurry up and die and be done with it.”

Basso’s online critics have been speaking out in the wake of the broadcast, with tweets declaring his approach “fat hating” and “stomach-churning.” And PETA swiftly responded to the episode with an ad highlighting the impact on animals slaughtered for the Heart Attack Grill’s meat-based menu. (To that, Basso replied with a single tweet: “Our vegan menu includes Lucky Strike cigarettes. They are pure leaf tobacco with no meat byproducts.”) Since Basso launched the restaurant concept in 2005, he has been heavily criticized in the media, characterized as a “drug pusher,” and much worse.

In a conversation with Yahoo Health, Basso (who noted that the “7 Deadly Sins” episode was shot two years ago) maintained that he is actually a performance artist who is simply resorting to shocking means in order to get across his message: that obesity will kill you. “I do more to combat the obesity epidemic than any other individual in the country, including the Surgeon General,” claimed the white-coat-wearing proprietor, who began his career, ironically, as the owner of a fitness center before finding his true calling
🌸
🌸 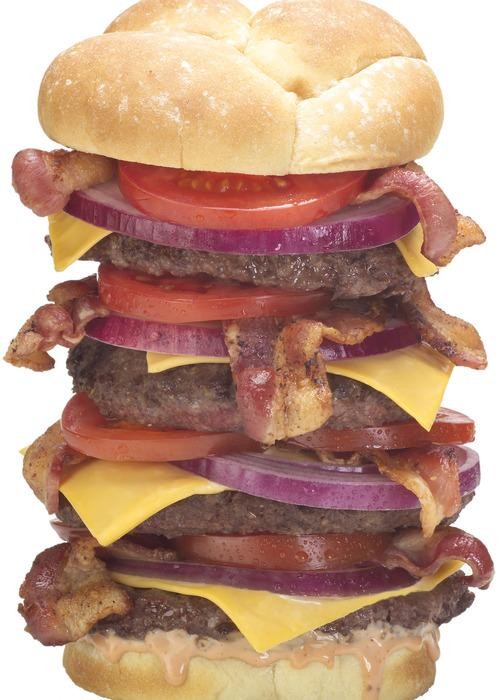 ​at the Heart Attack Grill.

If you love a great hamburger and are looking for a chance of pace, a visit to the Heart Attack Grill in Chandler, Arizona may be just what the doctor called for. That change of pace may involve a trip to the emergency room after you’ve finished your meal – but what’s a few hours on a gurney to someone who’s just had the most incredible burger of his life?

THE MENU AT THE HEART ATTACK GRILL

The Heart Attack Grill is, of course, well known amongst beef lovers for its simplistic yet decadent menu. Visitors have only a handful of options to choose from and should be willing to use up an entire week’s worth of calories before finishing a meal here. The Single Bypass Burger features one beef patty, cheese, sauces, onions, and tomatoes.

NURSES ON SITE AT THE HEART ATTACK GRILL

All of the staff “nurses” at the Heart Attack Grill are ready and waiting to help you through your meal. In uniforms that resemble a cross between an actual nurse on Halloween and a Hooter’s girl, the waitresses at the restaurant are – well – attentive. They’ll even push your wheelchair out to your car when you’re through, if need be.

Girls be warned – don’t apply for a job here unless you’re willing to wear a revealing shirt, a skirt that would make your grandmother turn over in her grave, and heels that no normal woman should wear outside of her home for more than an hour at a time, let alone work in. Despite the costumes, the theme remains professional and fun at the same time. Anyone willing to eat a triple or quadruple bypass burger deserves something nice to look at before he dies, anyway.

The Heart Attack Grill has had some legal trouble surrounding its staff of “nurses.” Back in 2006, the Arizona State Nursing Board solicited the advice of the Assistant Attorney General in Phoenix, Arizona. The Assistant Attorney General wrote a letter to the owner of the Heart Attack Grill concerning complaints he had received concerning the use of the term “nurse,” which legally can only be used when referring to a licensed medical practitioner. The Heart Attack Grill must have come to some sort of compromise with the state and the nursing board, as the word “nurse” still appears in all of their advertisements, but with a disclaimer stating that, “The Government Requires Us To Inform You That Our ? Nurses’ Do Not Actually Have Any Accredited Medical Training.” Big shocker there – anyone with medical training would run as far as possible from this menu!

THE HEART ATTACK GRILL IN THE NEWS

The Heart Attack Grill has gained notoriety for its incredibly large burgers and because of its truly unique and off the wall themed entertainment. The restaurant, owned by “Dr. Jon,” has been featured internationally with spots on Japanese, French, and American news networks. Even Rush Limbaugh and Geraldo Rivera have jumped on the Heart Attack Grill bandwagon.

The nursing industry is up in arms – complaining that the atmosphere degrades their profession by mixing sexual fantasy and bad-for-you junk food. The owner feels as though he’s catering to his public, and the waitresses love the attention and tips they receive while role-playing in the safe atmosphere of a local burger joint.

We take that back – 99 men and one woman. Dr. Jon’s nurse, the astounding 90-pound Catarina Andorfer, can eat the Quadruple Bypass Burger in 8 minutes and 26 seconds!
🌸 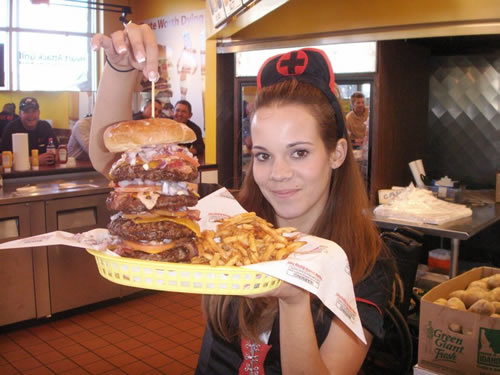