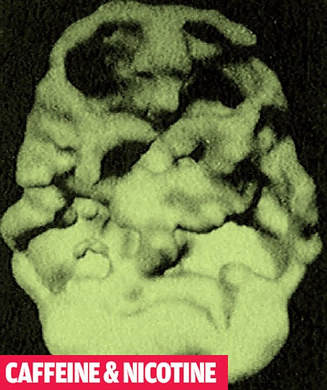 The brain of this heavy caffeine and cigarette user looks in an even worse state
than the drug users and heavy drinkers.

Caffeine and cigarettes are stimulants in the short term,
​but in the long term they can narrow the blood vessels in your brain.

This reduces brain activity, especially in the vital pre-frontal cortex and temporal lobes. 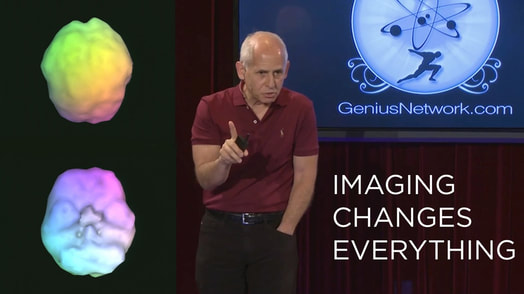 Dr. Daniel G. Amen
Neuroscientist and Psychiatrist Dr. Daniel G. Amen, who is professor of psychiatry and human behavior at the University of California, Irvine, and director of the Amen Clinics.

​He explains how behavior such as anxiety, anger or impulsiveness could be related to the way specific areas in your brain work. 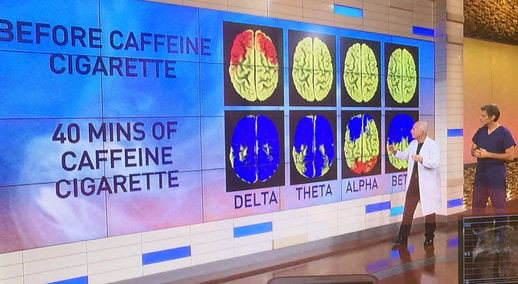 is a specific expression of Attention Deficit Hyperactivity Disorder (ADHD), a neurological condition which, according to estimates by the National Institute of Mental Health, affects between three and five percent of all children. Adults often suffer from depression which can lead to low self-esteem, workplace problems, and difficulty with relationships. In extreme cases, this can lead to substance abuse or anger issues.

What Is Sleep Apnea?

Sleep apnea (AP-ne-ah) is a common disorder in which you have one or more pauses in breathing or shallow breaths while you sleep. Sleep apnea usually is a chronic (ongoing) condition that disrupts your sleep. As a result, the quality of your sleep is poor, which makes you tired during the day. Sleep apnea is a leading cause of excessive daytime sleepiness. 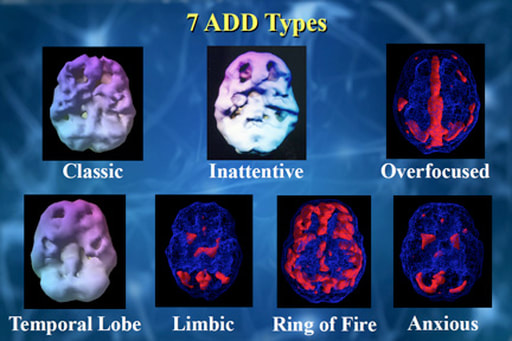 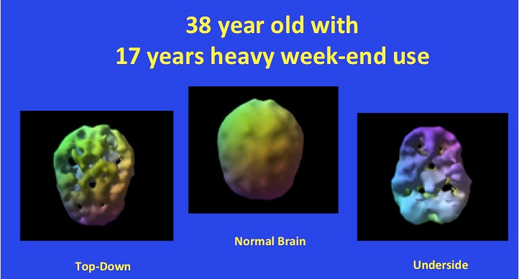 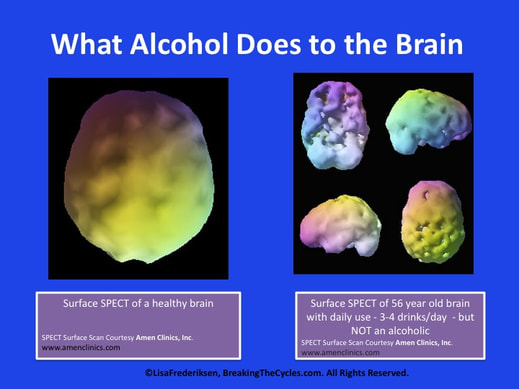 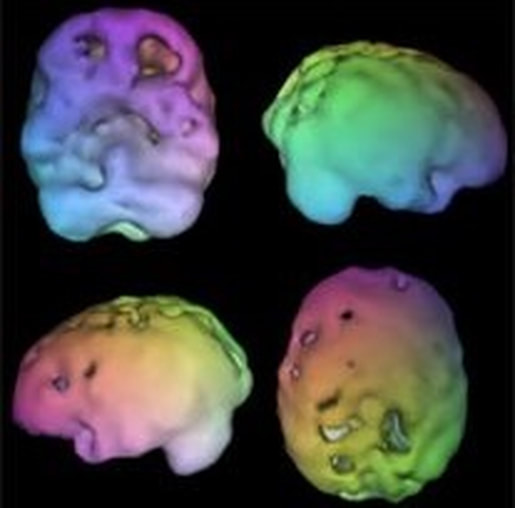 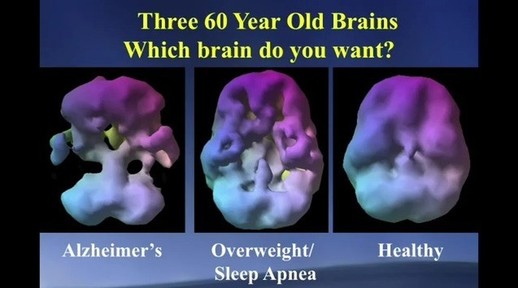 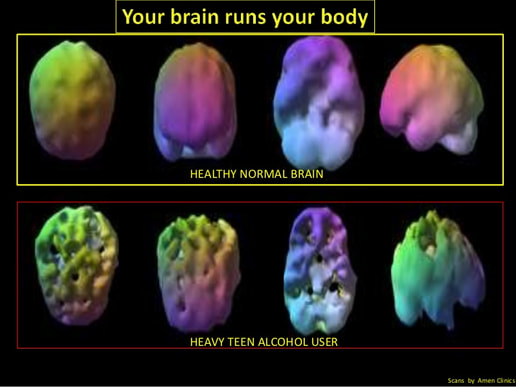 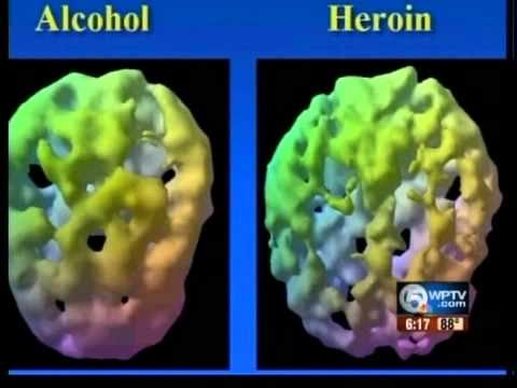 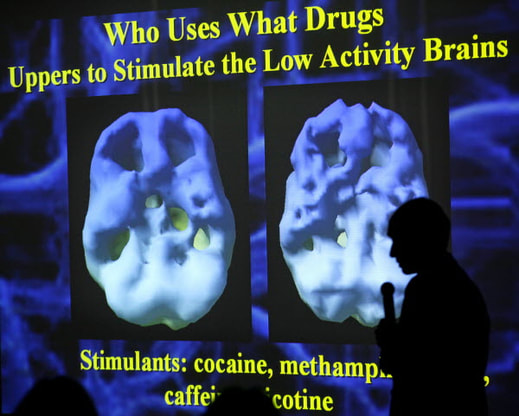 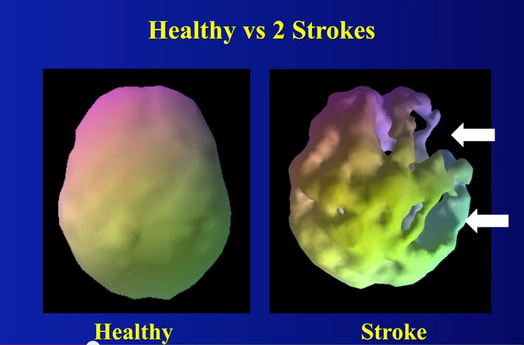 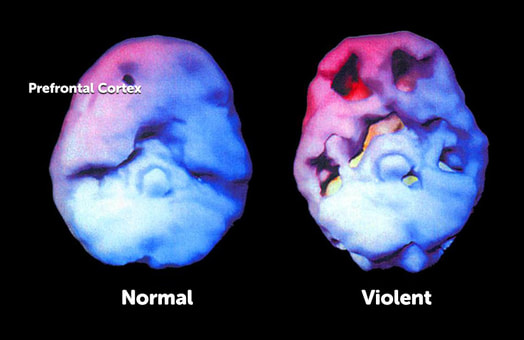 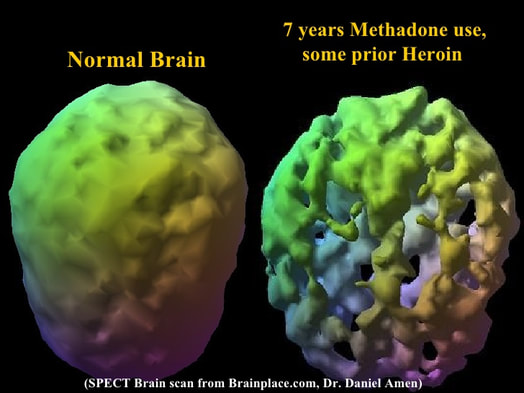 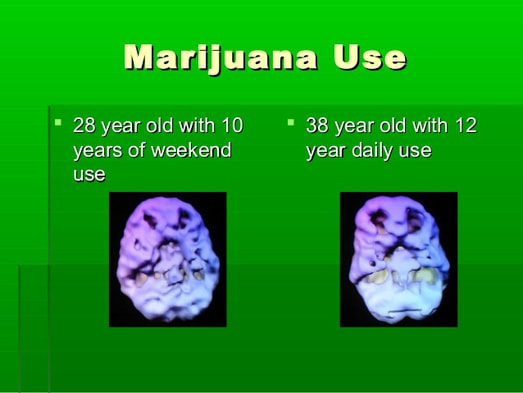 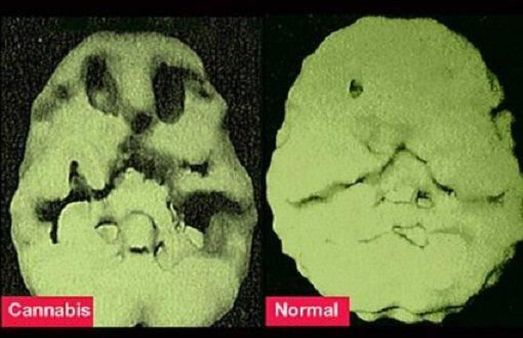 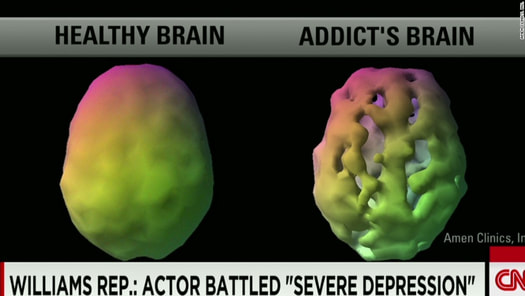 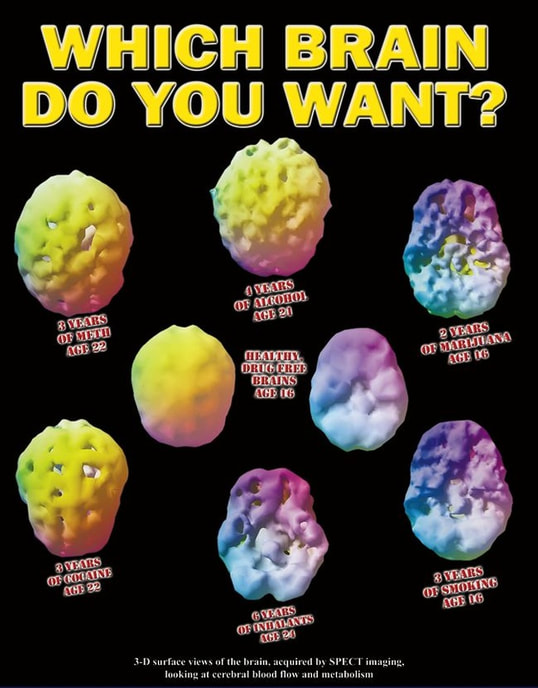 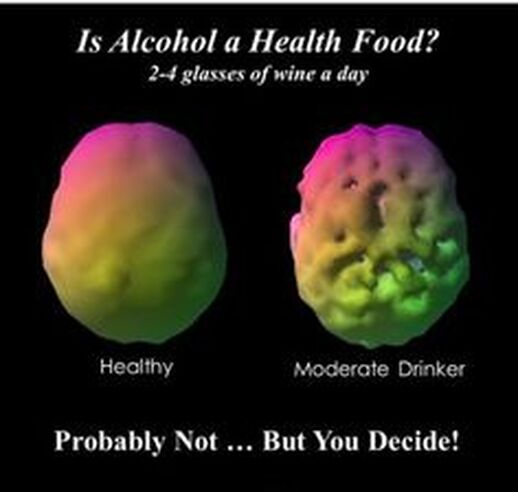 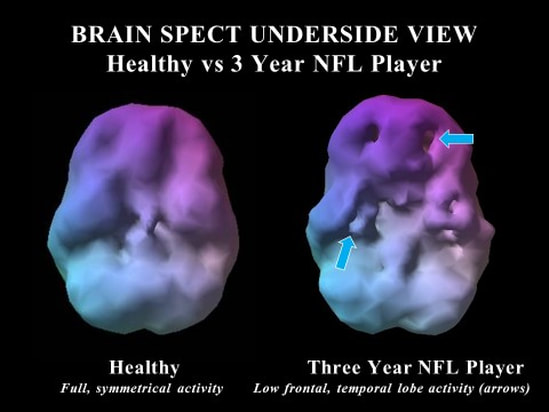 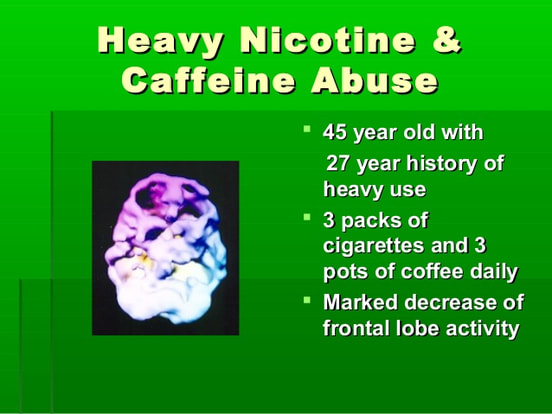 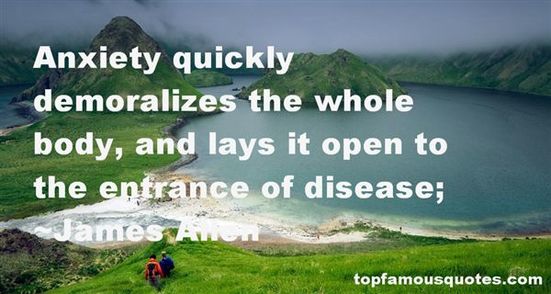 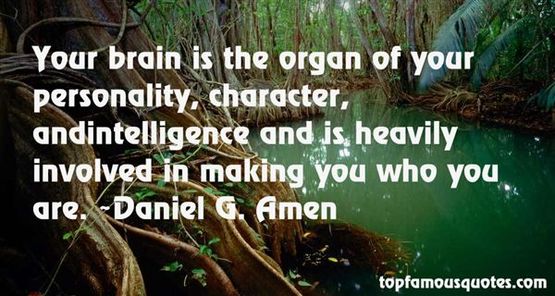 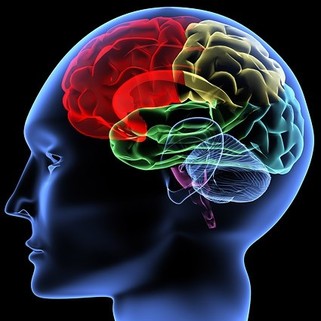 ​even caffeine on the mind.

By JEROME BURNE FOR MAILONLINE 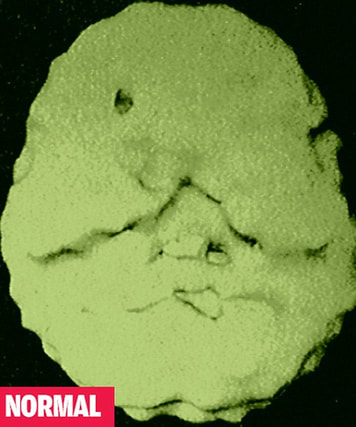 Compare this with the pits and disruptions seen in the other images on this page, where there is poor or no blood flow in the brain. This can have a dramatic effect on behaviour, depending on which area of the brain is affected. Often these behavioural changes will be blamed on a psychological problem, when, in fact, there is a genuine biological basis for them. It is a frighteningly eloquent warning of the damage we often voluntarily inflict on ourselves. 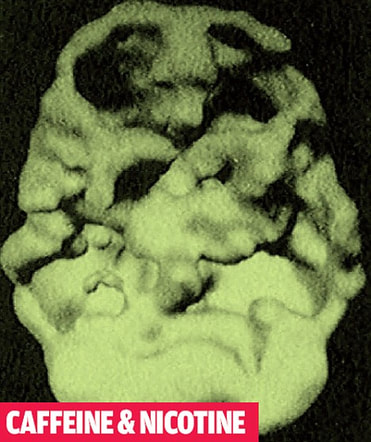 The brain of this heavy caffeine and cigarette user looks in an even worse state than the drug users and heavy drinkers. Caffeine and cigarettes are stimulants in the short term, but in the long term they can narrow the blood vessels in your brain. This reduces brain activity, especially in the vital pre-frontal cortex and temporal lobes.

The two large black holes at the top of the brain are in the prefrontal cortex - just under the forehead - which is the brain’s boardroom. This is where you learn from your mistakes; damage here makes you vulnerable to depression. The distorted temporal lobes (the large gaps in the middle) are linked to poor memory. This patient, a company chief executive, had complained of lack of energy and trouble concentrating. Dr Amen recommends no more than three cups of coffee a day, limited tea, fizzy drinks and chocolate, and giving up smoking. 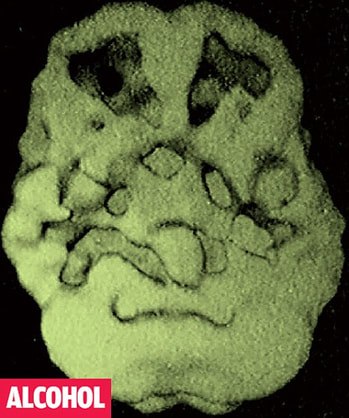 When this patient saw what his drinking had done to his brain, he burst into tears. Until then, he’d denied there was a problem. Large amounts of alcohol close up blood vessels in the brain, causing cells to die off, especially in the prefrontal cortex - these ‘dead spots’ are the two craters you can see at the top of this picture. The prefrontal cortex directs and supervises your behaviour - damage can lead to poor judgment, weak control of impulses and an increased risk of depression.

The scanner that Dr Amen uses is known as SPECT (photon emission computerised tomography) and is specially useful for showing brain activity. 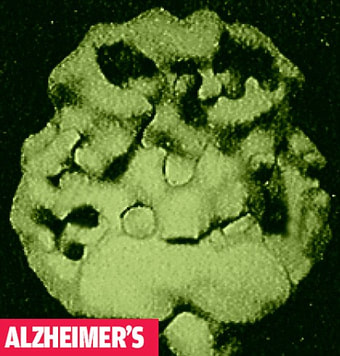 Dr. Amen believes the SPECT scan should be much more widely used as a diagnostic tool for spotting Alzheimer’s because it can detect signs of this destruction up to six years before symptoms such as memory loss appear. ‘It’s not true you can’t detect Alzheimer’s early,’ he says. ‘Everyone should have had a scan to check for developing Alzheimer’s by the time they are 50.’ 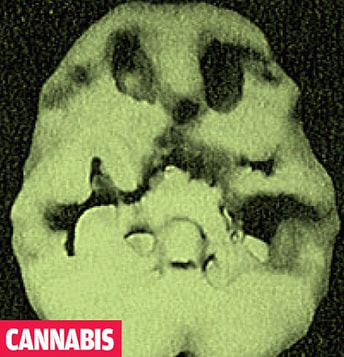 This should come as a shock to those who want to downgrade cannabis from a class B to a class C drug. Like other recreational drugs, cannabis squeezes down blood flow, leading to brain cell damage and death.

Dr. Amen’s research has found that it particularly affects the temporal lobes - the greatly enlarged black spots on either side of the middle of the picture. This area is responsible for memory - could this, he wonders, be a reason for the poor memory and lack of motivation that chronic users often report? This patient was a 16-year old boy who had used marijuana every day for two years. The scan came as a great shock to him and his father, who was a doctor and strongly opposed to recreational drugs. 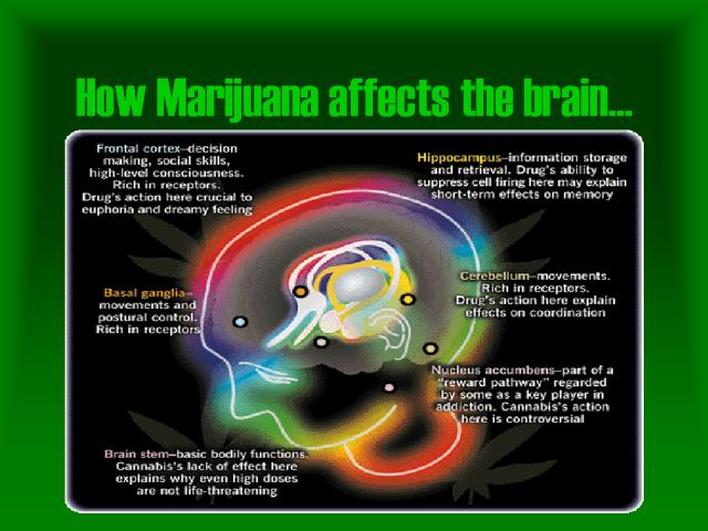