Do You Really Want to Eat Hot Dogs

"The hot dog's gustatory glow took a significant hit in 2009 when the American Institute for Cancer Research (AICR) issued its landmark report1 about hot dogs and cancer risk, based on more than 7,000 scientific studies.

AICR determined that every 50 gram serving of processed meat you consume daily—for example, just ONE hot dog—raises your risk for colorectal cancer by 21 percent.

Despite these health warnings, frankfurters have been unstoppable." 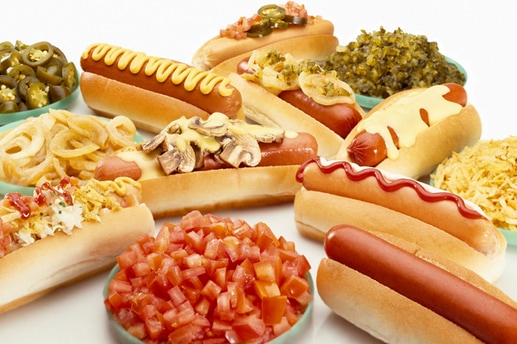 Unacceptable rates of childhood obesity and disease are evidence of the damage being done to our children by hot dogs, sodas, and other unhealthy foods. With such grave health dangers, the earlier that fast food habits can be nipped in the bud, the better. Kids are extremely vulnerable to and under constant bombardment by junk food marketing.

If you want to see evidence of how powerful this brainwashing can be, take a look at the eye-opening video of Jamie Oliver's experiment, where he attempts to educate a group of elementary schoolers about what really goes into chicken nuggets. Of course, he COULD have used hot dogs for the example and the outcome would have probably been the same.

Despite his success in disgusting them with what really goes into a chicken nugget, they STILL want the nuggets! This experiment reveals the depth of children's emotional attachment to fast food—which also shows just how effective fast food marketing is to children.

An even more powerful marketing strategy has emerged for brainwashing your child, which takes advantage of smartphones and other mobile devices. The "advergame" is a game that promotes a particular brand, product or message by integrating it into play.

The game IS the advertisement, engaging children to such as extent that they form strong relationships with the product or brand, so they consume more of it—and research proves it works. For example, KFC's "Snack in the Face," which mimics the massively popular game Angry Birds, is described as "the future of junk food advertising."18

Do You Really Want to Eat Hot Dogs

The hot dog is one of America's most popular foods, with the average person consuming 50 of them per year. Hot dogs are one of the most nutritionally bankrupt foods.

Yet for decades, they've been given a free pass, granted one pardon after another thanks to their towering status in American culture. But when you look at what they are giving you in return, you will want to seriously reconsider their status.

The hot dog's gustatory glow took a significant hit in 2009 when the American Institute for Cancer Research (AICR) issued its landmark report1 about hot dogs and cancer risk, based on more than 7,000 scientific studies.

AICR determined that every 50 gram serving of processed meat you consume daily—for example, just ONE hot dog—raises your risk for colorectal cancer by 21 percent. Despite these health warnings, frankfurters have been unstoppable.

In 2013, Americans spent $2.5 billion on hot dogs in US supermarkets, which amounts to more than one billion packages of wieners. During peak hot dog season—which is from Memorial Day to Labor Day—Americans belt down seven billion dogs.

On the Fourth of July alone, Americans consume 150 million hot dogs—enough to stretch from Washington D.C. to Los Angeles more than five times! Hot dogs pose another danger for your child that you may not be aware of—they are responsible for 17 percent of all choking cases among children, killing about 80 kids per year.2

Many blame the hot dog's carcinogenic effects on nitrates and nitrites, but I would argue that this is an overly simplistic view. When you look at what goes into hot dogs and how they are made, there is plenty of blame to go around.

Between the type and grade of "meat" used and its sources, as well as the torrent of chemicals added to make the dogs safe and palatable—of which nitrates are only one—it's easy to understand how serious health problems could arise.

Most of the meat and meat by-products come from confined animal feeding operations (CAFOs) where animals are tortured in crowded, unhealthy, unsanitary, and cruel conditions, as the primary goal is cheap food, not quality food.

The video at the top of the article about how hot dogs are made provides a somewhat glorified view of the process, but it does succeed in portraying justhow far from natural this food really is. And when you boil it down, it's rather disgusting.

Here is the not-glorified version. They start with an animal carcass that's been stripped of all desirable cuts, boil the heck out of it, force it through a metal sieve, add water, grind it up into a slimy carcass paste ("meat emulsion" or "meat batter"), add a bunch of chemicals to make it taste good and binders to make it stick together, then extrude it into links.3, 4

'And ALL the Trimmings'

Once desirable meat cuts are removed from beef, pork, and poultry (steaks, chops, ribs, thighs, breasts, briskets, etc.), what remains is a carcass consisting mostly of gristle, fat, and offal. The meat industry refers to this as "trimmings." According to the Food and Agriculture Organization of the United Nations (FAO):5

The butchering process imparts a considerable amount of bacteria to these carcasses, but because hot dogs are pre-cooked, manufacturers can get away with using these pieces and parts even if they are teeming with bacteria.

Cooking helps kill them, as well as separating the remaining muscle, fat, and connective tissues from the head and feet bones. The slimy paste that results from this rendering brew is what's referred to as "mechanically-recovered" meat. The process of manufacturing hot dogs is colorfully summarized in the Daily Mail:6

"In vast metal vats, tons of pork trimmings are mixed with the pink slurry formed when chicken carcasses are squeezed through metal grates and blasted with water. The mush is mixed with powdered preservatives, flavorings, red coloring and drenched in water before being squeezed into plastic tubes to be cooked and packaged."

Large hot dog factories can blast out 300,000 of these dogs per hour. It takes only 30 seconds to build a chain of hot dogs that would span a soccer field twice. When a commercial operation is THIS massive, you can get some rather revolting contaminants.

The Truth About Nitrates and Nitrites

Many are confused about nitrates and nitrites, so let me clear up the confusion. Nitrates are present in many vegetables, such as beets, celery, lettuce, spinach, and most other leafy green vegetables. When you eat nitrates, your body converts a small percentage of them into nitrites. Nitrites and nitrates are not inherently bad for you—in fact, they are the precursor to nitric oxide (NO), which lowers your blood pressure and exerts mild anti-inflammatory effects.

Sodium nitrite is a synthetic preservative added to meats like hot dogs to help them maintain that nice pink color. The problem is, in the presence of heat—especially high heat—nitrites can combine with amines in processed meat to form nitrosamines, and it's these that are carcinogenic. Nitrosamines inflict cellular damage and have been linked to cancer, typically in your colon, bladder, stomach, or pancreas. Processed meats are far more prone to nitrosamine formation than vegetables, due to being higher in amines and intensively heat processed.11, 12, 13, 14

Vitamin C inhibits some of the nitrosamine formation, which is why 550 ppm ascorbic acid is now required added to all processed meats in the US.15 Vegetables contain more vitamin C, beta-carotene, and other antioxidants, which is another reason why the nitrates in vegetables don't cause a problem.

According to the University of Minnesota Extension, around 90 percent of the nitrite in your body comes from vegetables, while just 10 percent comes from processed meats.16 When meat or fish is cooked at high temperatures, other potent carcinogens are also created, such as heterocyclic amines (HCAs) and advanced glycation end products (AGEs). If your processed meat is smoked, you can add polycyclic aromatic hydrocarbons (PAHs) to the list.

What About Nitrates in Organic Hot Dogs?

Natural or organic hot dogs may not be much lower in nitrite—and some may even be higher than conventional hot dogs. Companies that label their products natural or organic must use natural sources of the preservatives, which usually come in the form of celery powder or celery juice, as celery is naturally high in nitrate.

A 2011 study published in The Journal of Food Protection found that natural hot dogs had anywhere from one-half to 10 times the amount of nitrite of conventional hot dogs.17 A similar scenario exists for bacon. So, buying organic hot dogs is not necessarily going to reduce your nitrate exposure—although it will likely result in a higher quality food product in many other respects.

The Best of the Wurst

If you are going to eat hot dogs or other processed meats once in awhile, there are a few considerations that may help you reduce your risk of adverse health affects. Again, these options are not ideal as these meats are still processed, but the following guidelines will ensure you are consuming a product that is better for you than the vast majority of processed meats on the market:


Truly Healthy Meats are a Much Better Option

In contrast to eating products that are little more than a heat-processed slurry of reassembled slaughterhouse remains, real meat is a different story altogether. Make sure the meat you consume is grass-fed, organically and humanely raised, preferably from a local farmer you know and trust. Grass-fed beef tends to be leaner and have higher levels of vitamins, minerals, and cancer-fighting CLA. It also has a healthier ratio of omega-6 to omega-3 fats. Organic farms tend to provide far more sanitary conditions, so the animals are less likely to harbor dangerous pathogens.

Organic, grass-fed standards do not permit non-medical use of antibiotics, and with antibiotic-resistant infections being a major public health hazard today, this is an important consideration. To counteract some of the harmful effects of cooking, add homemade spice rubs, herb-enhanced marinades, or even fresh blueberries to your meat prior to cooking. This will not only augment its nutritional value, but also reduce the harmful substances like heterocyclic amines that are formed during the cooking process. Consume plenty of fresh vegetables along with it, which will further enhance its nutritional value. 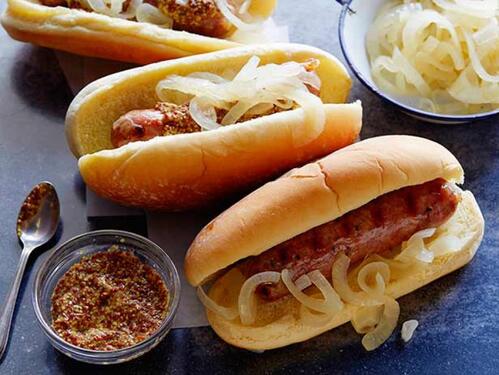