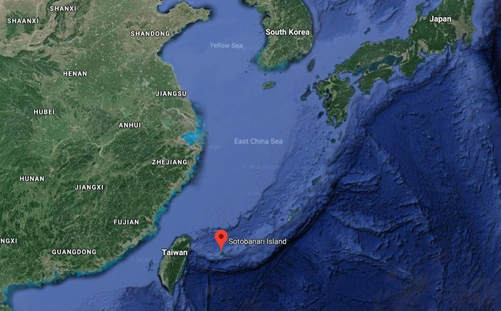 Mr. Masafumi Nagasaki shared an insight
​
that many in the current unstable world would do well to note.
​
When asked "What is the worst thing from civilization"

his answer was simple - two words: 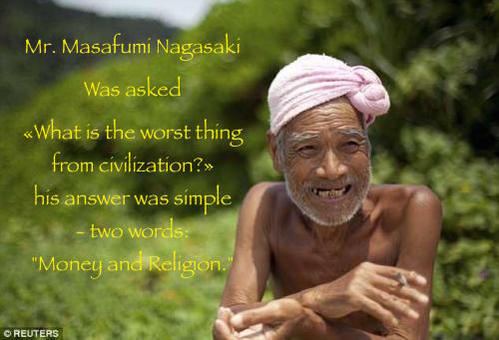 ​An 82-year-old Japanese hermit who "escaped" the entertainment industry and found bliss on a remote island has been yanked from his home of 29 years by Japanese authorities and taken to a government facility some 37 miles away.

Masafumi Nagasaki decided to live in solitude in 1989 after a friend told him about an archipelago in the southwest of Okinawa Prefecture, Japan. He made his home on Sotobanari
("Outer Distant island"), a 1,000 meter-wide kidney-shaped island.

Surviving on rice cakes and bottled water, Nagasaki rarely saw anyone outside of his weekly trips
by boat to a settlement an hour away for provisions -
​paid for with a small stipend sent to him by his family.

Each day is conducted according to a strict timetable, starting with stretches in the sun on the beach. The rest is a race against time as he prepares food,
washes and cleans his camp before the light fails and insects come out to bite. - Reuters

“Finding a place to die is an important thing to do,
and I’ve decided here is the place for me,” he said.

and has chosen to stop hunting and fishing out of a sense of guilt over
having to kill the few animals who also inhabit the island.

Cerezo told news.com.au that Nagasaki was evicted after someone found him in a "weak" state on the island, despite his Nagasaki being in generally good health.

He "probably only had the flu" when he was found, said Cerezo.

Nagasaki describes how a typhoon devastated the island in his second year - stripping it of vegetation and leaving him to bake in the sun.

He persevered for 27 more years, adapting to his environment
while learning to make due with virtually nothing.

He also described his perfect death, on the island in 2012 - his home of nearly three decades.

“It hadn’t really occurred to me before how important it is to choose the place of your death, like whether it’s in a hospital or at home with family by your side.

But to die here, surrounded by nature — you just can’t beat it, can you?”

Finally, Nagaskai shared an insight that many in the current unstable world would do well to note.
​
When asked "What is the worst thing from civilization" his answer was simple - two words:

We wonder how many of the 29 years alone it took him to realize that.

​on deserted island for thirty years

​‘captured’, brought back to civilization

‘Naked hermit’ who lived on deserted island for thirty years ‘captured’, brought back to civilisationA MAN who escaped civilisation to live naked on a deserted island got away with it for 30 years. But after all that time, he has just been kicked off.

A MAN who lived as a castaway on a deserted island for almost 30 years has been removed from his home after becoming the longest lasting voluntary castaway alive.

Masafumi Nagasaki arrived on the island of Sotobanari, on the Yaeyama Islands, an archipelago in the southwest of Okinawa Prefecture, Japan, in 1989 and lived a life in solitude until he became known as the “naked hermit” as a 76-year-old in 2012. The island is one of the few that remain deserted in Japan where according to locals, even fisherman rarely stop.

Mr Nagasaki is among the few voluntary castaways who have spent decades on a deserted island; he has surpassed Australian castaway David Glasheen who this year celebrates 21 years on Restoration Island, off the coast of Far North Queensland.

His recent eviction was detected by Alvaro Cerezo, who documents island castaways including the ‘real life tarzan’ who lived in the deepest jungles of Vietnam.

There are no phones. No lighters. No fresh water — and not many clothes either. He braves typhoons and biting mosquitoes in the buff.

Mr Nagasaki’s only wish was to die on the island he called home for the last three decades.
“Finding a place to die is an important thing to do, and I’ve decided here is the place for me,” he told Reuters in 2012.

“It hadn’t really occurred to me before how important it is to choose the place of your death, like whether it’s in a hospital or at home with family by your side. But to die here, surrounded by nature — you just can’t beat it, can you?”

“I’ve never felt sad here, I cannot survive if I have those kinds of feelings. Things here are more realistic.”

Mr Nagasaki was so confident he said he “will never move from here even if the world changes”.
“I won’t leave even if someone tells me there is a better place. All that I want I can find it here. I don’t need any thing else,” he said.

“I have no option, I’ve already told my family I will die here. My wish is to die here without bothering any one, that’s why I don’t want to get sick or injured. I want to be killed by a typhoon, so nobody can try to save me. To die here is the best, its just perfect for me.”

It’s unclear how Mr Nagasaki ended up on Sotobanari in the first place. At one point he was married and there are suspicions he has two children, but he “doesn’t like to talk about his past”, according to Mr Cerezo.

He was believed to have been a photographer before escaping civilisation, but again, “he doesn’t want to hear or talk about”. He even apparently ran his own hostess club in Niigata, a port city in Honshu, Japan’s main island.

Mr Nagasaki said he was working in a factory in Osaka when one day a colleague told him about a mysterious archipelago and since then he dreamt of escaping from civilisation. One day, when on a flight, he was “horrified” by the amount of pollution he saw in the sea below and “exploded”.

So the self-confessed “city man with no outdoor experience” packed his bags and found his remote island hideaway. He thought he would stay perhaps two years max, but ended up clocking almost 30 years.

“Here, on the island I don’t do what people tell me to do, I just follow nature’s rules. You can’t dominate nature so you have to obey it completely.”

Masafumi Nagasaki with Docastaway’s Alvaro Cerezo, who spent five days in the island with the man dubbed the “naked hermit”.Source:news.com.au

Mr Nagasaki said he wanted to die on the island, but has been removed by authorities.Source:news.com.au

Mr Nagasaki spent his first few years on the island clothed but when a typhoon swept through and destroyed his few belongings, he realised “wearing clothes here was completely out of place for me” and began to live life commando.

“Walking around naked doesn’t really fit in with normal society, but here on the island it feels right, it’s like a uniform,” he told Reuters in 2012.

“If you put on clothes you’ll feel completely out of place.”

He’s spent the rest of his time on the island naked and alone but he found friends in some strange places; he stopped eating meat and fish and refused to eat the vast number of turtle eggs left by its maternal visitors.

“I’ve seen those baby turtles being born and crawling towards the sea. I get goosebumps every time I see that. It makes me think how wonderful life is.

“This environment makes me feel like that this island really changed me. I don’t know if it’s good or bad, but I have no problem with it.”

Despite the freedom of a tropical paradise, Mr Nagasaki’s routine was strict; gym session in the morning, followed by hours of beach cleaning with a pair pf white gloves and a rake.

“I have never seen a beach as clean as his, not even in the most luxurious island resorts,” Mr Cerezo said.

“They were five unforgettable days and I am extremely thankful to have had the opportunity to see through his eyes for the last time and enjoy his precious island.”

Masafumi Nagasaki lived on the island for 29 years.Source:news.com.au

Mr Cerezo has dedicated a website to his friend.Source:Supplied

Fast forward to April 2018 and authorities have removed the 82-year-old and returned him back to civilisation.

“He was kicked out of the island, someone saw him on the island and it seems like he was weak,” Mr Cerezo told news.com.au.

“They called the police and they took him back to civilisation and that’s it. He couldn’t even fight back because he was weak. They won’t allow him to return.”

Mr Cerezo, whose business it is to find idyllic islands and host private visitors, said that since being removed, Mr Nagasaki is now living in the nearest city to the island, Ishigaki, 60 kilometres away in a government house.

“His health is OK, he was probably only sick or had the flu [when he was taken] but they won’t allow him to go back any more, he cannot go there, it’s over.” 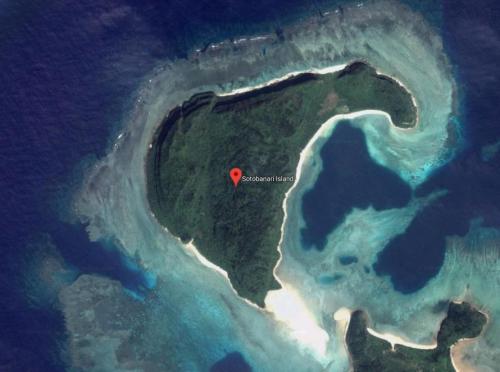 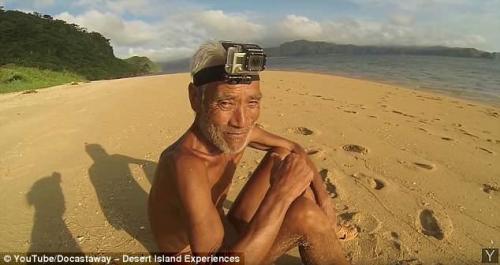 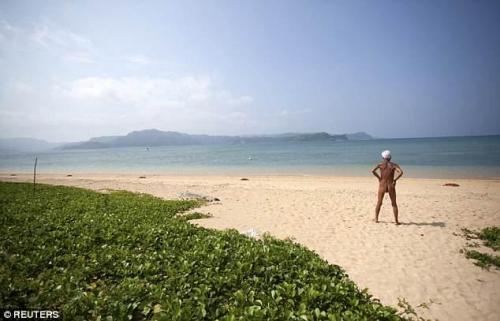 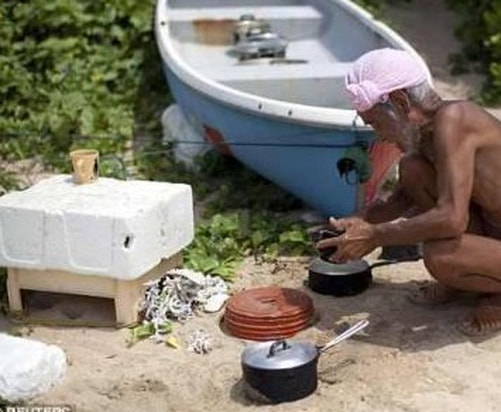 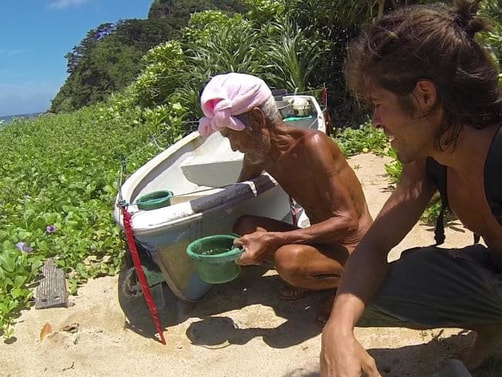 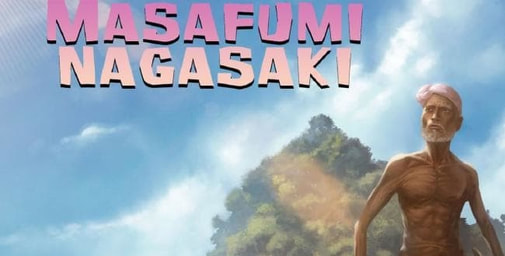 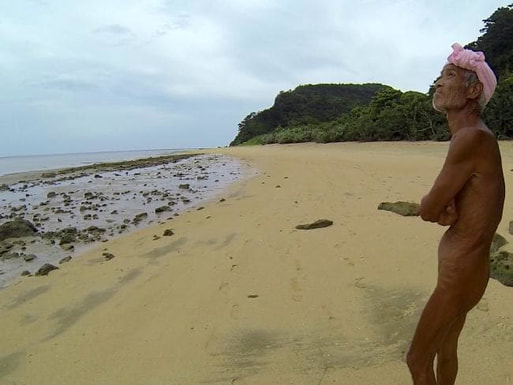 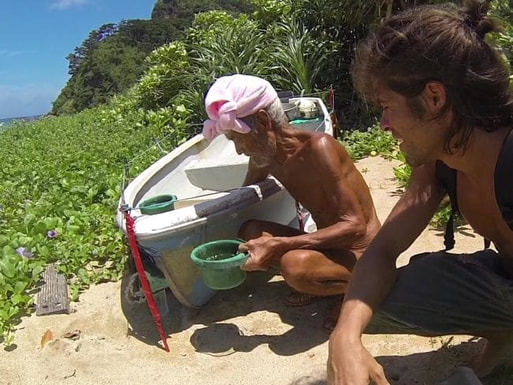