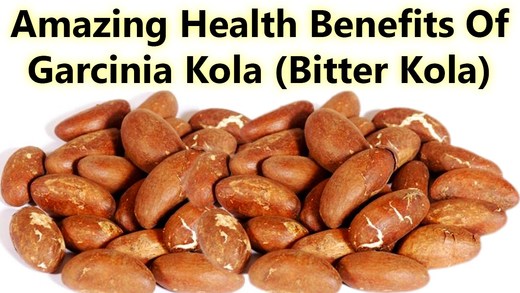 https://www.bonanza.com/listings/1-KILOGRAM-2-2-POUND
Where to Buy it? 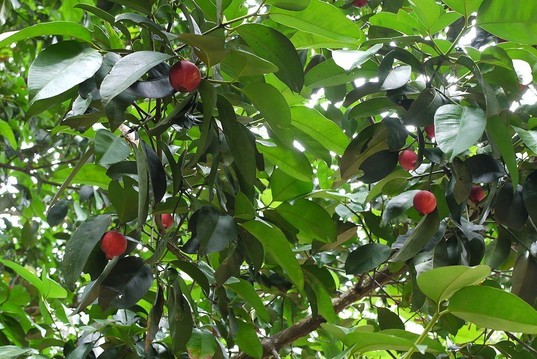 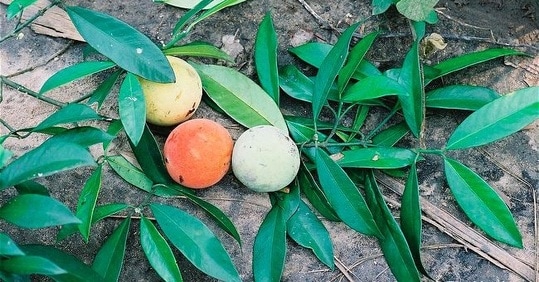 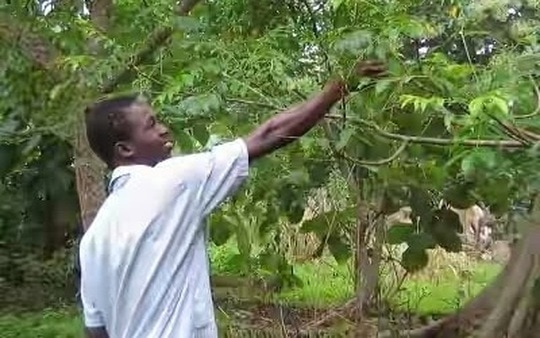 Bitter kola is a type of nut mostly found in several parts of Nigeria and West-Central Africa as a whole and the tree grows in the (tropical) rain forests.

Its biological name is “Garcinia kola” and belongs to the family of “Guittiferal”. Bitter Kola has been identified as a potent antibiotic which could be effective in the treatment of many diseases. The fruit, seeds, nuts and bark of the tropical tree have been used for centuries in traditional medicines to treat many forms of ailments.

I hope many Africans both at home and in diaspora will continue to appreciate herbal medicines with little to no side effects compared to pharmaceutical drugs with gazillion known side effects. I have broken down the several health benefits of Bitter Kola (Garcinia kola) for the healing of many common and seasonal ailments:

Bitter kola (Garcinia kola) has been used for centuries to treat chest colds in traditional medicine, but research has taken a look and found out why it is effective. A study in the 2009 issue of The Internet Journal of Pulmonary Medicine, performed on mice, reports that Garcinia kola improved respiratory function after 28 days of use of a Garcinia extract.

Written by Simon Adekunle of the Ekiti State University in Nigeria, the study shows that Garcinia kola works by dilating the alveolar ducts and sacs in the lungs by improving the strength of the fibers in the lung tissue. Bitter kola’s beneficial lung properties are attributed to its high antioxidant content.

Considerable experimental studies found the chemical constituents in bitter kola have anti-malaria properties. That aside, traditional healers have for many years prescribed bitter kola for the treatment of malaria infections. Researchers who reported that bitter kola had anti-malaria effect in the 2010 issue of Journal of Medicinal Plants Research, from a survey of plants used by traditional healers in the Democratic Republic of Congo, attributed this to its quinones content.

“We extracted its chemical constituents, which is called Kolaviron and when it was tested on malaria parasite, we found it had significant anti-malarial activity,” says Professor Olusegun Ademowo, a researcher at the Institute for Advanced Medical Research and Training, College of Medicine, University of Ibadan, South West of Nigeria.

“What we are now trying to find out is the right dosage of its extract that would be required in treating malaria. Also, we are looking at what other effects its use will have on the human cells. But at the moment it is in the preliminary stage.”

In 1999, a group of researchers in Kinshasa, Congo, attested to why people should consider feeding more on bitter kola to ward off malaria. Under laboratory conditions, they found extracts from bark, stem and seed of bitter kola tree inhibit the growth of malaria parasite (Plasmodium falciparum) by at least 60% at a low concentration of 6 mg/ml.

Osteoarthritis is the most common form of arthritis, characterized by pain, inflammation and limited movement in the joints, according to the National Institutes of Health. Causes of osteoarthritis can include joint injury, obesity and aging.

Since many arthritis sufferers prefer natural herbal medicines to other pain relievers and medications, researchers at Obafemi Awolowo University in Nigeria tested the effects of Garcinia kola against arthritis symptoms.

The results of the study, written by Olayinka O. Adegbehingbe and published in the July 2008 issue of the Journal of Orthopaedic Surgery and Research, conclude that Garcinia kola significantly reduced inflammation and pain and increased joint movement in subjects that had osteoarthritis symptoms. It is believed that Garcinia kola works well as a result of its antioxidant properties.

The side effects reported from the Garcinia kola use in this study were “weight loss”, “increase in sex drive” and “extended sleep” which many considered helpful to meet their individual and marital demands.

(Note: If anyone takes Garcinia kola and experience diarrhea, hives, irregular heartbeat or other signs of allergic reaction, discontinue use immediately and seek medical attention.)

An increase in eye pressure can lead to glaucoma, according to a report from The New York Times Health Guide. Researchers at Lagos University Teaching Hospital in Nigeria tested the effectiveness of eye drops that contained 0.5 percent extract of Garcinia kola. The results of their study, published in the January 2010 issue of Middle East African Journal of Opthamology, showed that the opthamolic solution that contained the Garcinia significantly reduced eye pressure when used twice a day.

Bitter kola is a potent antibiotic which could be efficacious in the treatment of HIV and AIDS. A researcher with the Nigeria Natural Medicine Development Agency (NNMDA), Mrs. Chinyere Nwokeke told the News Agency of Nigeria (NAN) that bitter kola could be used in treating opportunistic infections associated with HIV.

“Bitter kola is highly recommended in the treatment of HIV and AIDS because of its antibacterial, detoxification, and cleansing properties”, she said.
Mrs Chinyere Nwokeke also said that the chemical Saponin in bitter kola is responsible for its cleansing effect. Saponin is mainly used as tonic for the liver, it enhances the functions of the liver and gall bladder.

Bitter kola is often used to treat the symptoms of colds. It is suggested, in particular, for coughs and sneezing.

Bitter kola is known for its anti-inflammatory and antioxidant properties. It can be used to prevent infections and viruses, especially in relation to the immune system.

In many rural areas of Nigeria (and other parts of Africa), when food is suspected to be contaminated by bacteria or someone accidentally eats food poison, traditional healers often recommend the mastication of bitter kola immediately after eating. This usually prevent the development of any infection or poisoning. Herbalists even recommend the seed and the bark of bitter kola should be eaten together in cases where food poisoning is suspected, “it helps to detoxify the system“.

Bitter kola is not only anti-poison, it also has the ability to repel evil spirits according to traditional beliefs. Though it sound superstitious, many (myself included) believe it works and do have spiritual benefits.

Update: It is no surprise to me that bitter kola has been reported in Africa to be an effective natural treatment for ebola. It should be common among Africans to think that any immune system boosting food, fruits and nuts may be good for alleviating and treating the symptoms of ebola.

Feel free to download and distribute the picture for information purpose.In conclusion, bitter kola (garcinia kola)  have for centuries been used in African culture for both traditional and medicinal purposes. Garcinia kola contains saponin, kolaviron (a natural biflavonoid), dimeric flavonoid, and lipase inhibitor all of which is believed to have many healing properties.

Further more, it has shown to possess anti-inflammatory, antimicrobial and antiviral properties for treatment of several ailments.

In Nigeria (West Africa), bitter kola is known as Agbilu or Aki ilu in Igboland, Orogbo in Yorubaland, and Namijin goro in Hausaland. What do you call bitter kola in your native language or country?

And do you know of any other health benefits of bitter kola (garcinia kola) not mentioned here?

REFERENCE
DISCLAIMER: The information, including but not limited to, text, graphics, and other materials contained on this page are for informational purposes only. InformAfrica encourages the broad understanding and knowledge of things that matters most among the African people, including health matters as it relates to awareness. The information we provide should not be used as a substitute for professional medical advice, diagnosis or treatment. 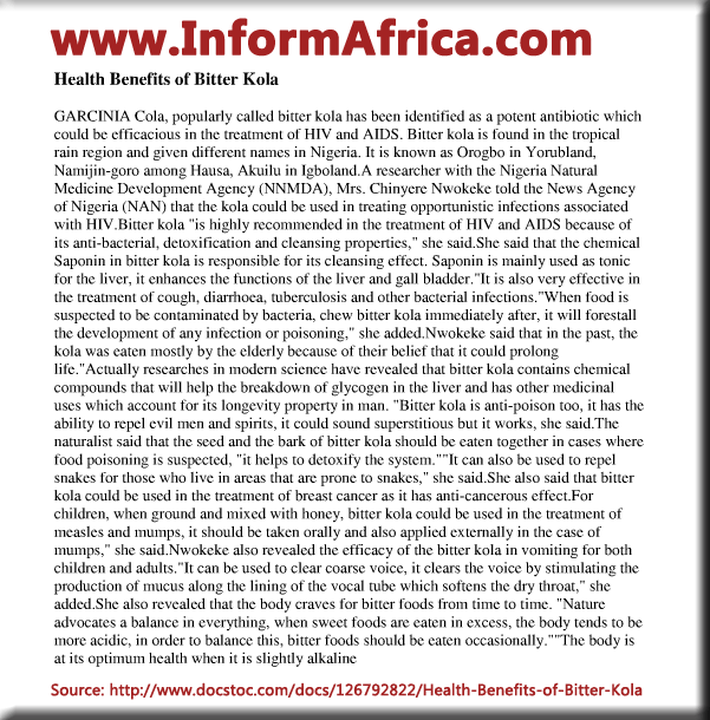 extraction, marketing, and other uses

Traditionally, these nuts were chewed as a masticatory substance to stimulate the flow of saliva but today they are widely consumed as a snack, food that you eat between meals.

These nuts contain large amounts of caffeine (substance that keeps you awake) and other stimulants like theobromine, kolatin and glucose. Bitter cola is also believed to be an aphrodisiac (makes people want to have sex). Unlike other cola nuts (cola nitida, cola acuminate), bitter cola is thought to clean the digestive system, without side effects such as abdominal problems, even when a lot of nuts are eaten.
​
Culturally bitter cola is an important part of life from birth to death in certain West African communities as it is not only used for traditional ceremony, marking special events like births, marriages and the conferring of chieftaincy. In some communities during marriage proposals young men offer cola nuts to the father of the bride and an exchange of cola nuts is essential in many business dealings as well.

In herbal medicine which is an integral part of life in this part of Africa, the fruit pulp is used for the treatment of jaundice, or high fever, while the bark of the tree is used in medicinal preparations to help heal various ailments.

The nuts are also dried, ground and mixed with honey to make a traditional cough mixture. In the last three to four years ground nuts has also been used as an industrial bitter agent in some Nigerian breweries. The hard wood of the bitter cola is not often used for timber or firewood, but the stems branches and roots are commonly used in the production of chew sticks.

Garcinia kola trees grow in humid rainforests near the coast as a medium sized tree that can tolerate shade. However deforestation in recent years has drastically reduced the number of these trees growing in the wild. Over the last decade Garcinia kola trees have been increasingly cultivated in secondary forests, as a component tree in plantations, or in agro forestry systems.

The trees are planted from seed and bear fruit after 10 to 12 years. At its peak, a mature tree yields on average, almost 500 fruits and 1700 nuts each year.
​
For example in Nigeria almost 70% of bitter cola is produced from natural or secondary forests in government reserves, the rest comes from trees growing in cocoa/cola combined plots and from oil palm/cassava farms and home gardens.

Extracting and marketing the nuts

The fruit pulp is collected after falling to the ground and is kept until its orange coloured, velvety skin softens. This may take five to six days. Extracting the nuts is a simple household affair that is not very labour intensive. The harvest is thrashed to release each fruit’s three to four kernels.

​These are referred to as bitter cola nuts as soon as the fruit pulp is thoroughly washed off. At this point the nuts are ready for eating fresh or can be air dried and stored in a cool, dry place. Both the fresh and dried nuts are appreciated by rural and urban populations.

In most countries where bitter cola is grown, it can be found in both local and nearby city markets, like the case of Nigeria.

In Cameroon apart from markets young men knowing how much the population is attached to this cola, hawk their wares around parks, roadsides and other places where people are on transit. You also fine bitter cola in roadside kiosk in major cities and towns in the northern part of the West African region, (Cameroon inclusive). The trade in bitter cola is worth an estimated 50000 US dollar a year in Nigeria.

Processing bitter cola takes time but entails little or no cost to the farmers involved in this activity. The resulting income has helped poor rural farmers pay school fees and materials or household goods.

Bitter cola’s increasing commercial value means it is important for farmers to cultivate rather than rely on the dwindling wild supplies.

For example, the nuts are more profitable than any other forest resource in Nigeria. In one season, a family can collect an average of three baskets of bitter cola weighing 25 kg.

This generates about 24 US dollars in family income. The ability to store the nuts and use them fresh or dried makes this a wonderful versatile and wonderful product. 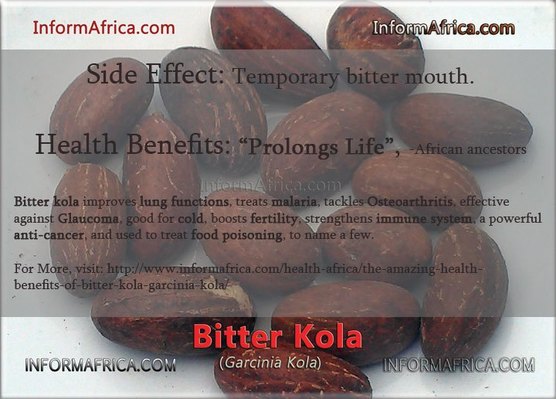