Maggot therapy is the controlled, therapeutic use of live blow fly larvae ("maggots") to treat skin and soft tissue wounds.

The history of maggot therapy, and the mechanisms by which it works, will be discussed below. But first, some disclosures:
In maggot debridement therapy, germ-free ("disinfected") larvae of therapeutic fly species ("medical grade maggots") are used to treat and manage wounds in a procedure known as "maggot therapy." The maggots are applied to the wound for 2 or 3 days within special dressings to keep the maggots from migrating. Since medicinal maggots can not dissolve or feed on healthy tissue, their natural instinct is to crawl elsewhere as soon as the wounds are clean, or the larvae are satiated.

The scientific literature identifies three primary actions of medical grade maggots on wounds:
The following topics about maggot therapy are detailed below:
History of Maggot Therapy

Maggots have been known for centuries to help heal wounds. Military surgeons noted that soldiers whose wounds became infested with maggots had better outcomes than those not infested. William Baer, while at Johns Hopkins University in Baltimore, Maryland, may have been the first in the Northern Hemisphere to have intentionally applied larvae to wounds in order to induce wound healing. During the late 1920's, he identified specific species, raised them in the laboratory, and used their larvae to treat several children with osteomyelitis and soft tissue infections. He presented his findings at a surgical conference in 1929. Two years later, after treating 98 children, his findings were published posthumously.

MDT was successfully and routinely performed by thousands of physicians throughout the 1930’s, but soon it was supplanted by the new antibiotics and surgical techniques that came out of World War II. Maggot therapy was occasionally used during the 1970's and 1980's, but only when antibiotics, surgery, and modern wound care failed to control the advancing wound.

The first modern clinical studies of maggot therapy were initiated in 1989, at the Veterans Affairs Medical Center in Long Beach, CA, and at the University of California, Irvine. Controlled clinical studies set out to compare maggot debridement therapy to the standard therapy being prescribed by wound care experts in the treatment of chronic pressure ulcers, diabetic foot ulcers, venous stasis ulcers, post-traumatic wounds, etc. The results of those controlled comparative studies, and the many studies and reports that followed, indicate that MDT is still useful today as a safe and effective treatment tool for some types of wounds. Those studies also demonstrated that there is no reason to withhold MDT until all other modalities have been exhausted, nor use it only as a "last resort." Indeed, while published accounts of "pre-amputation MDT" show a limb salvage rate of over 40%, the success of MDT when used earlier in the course of treatment (say, as a 2nd or 3rd or 4th line treatment) is even more dramatic.

Take a look at some data from just two of the published studies, demonstrating significant debridement in pressure ulcers and diabetic foot ulcers treated with maggot therapy, compared to control therapy. 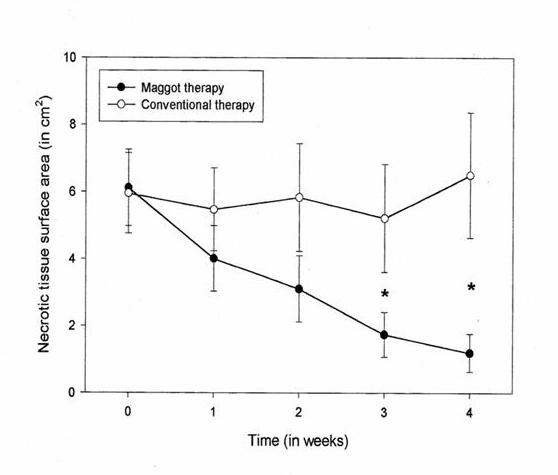 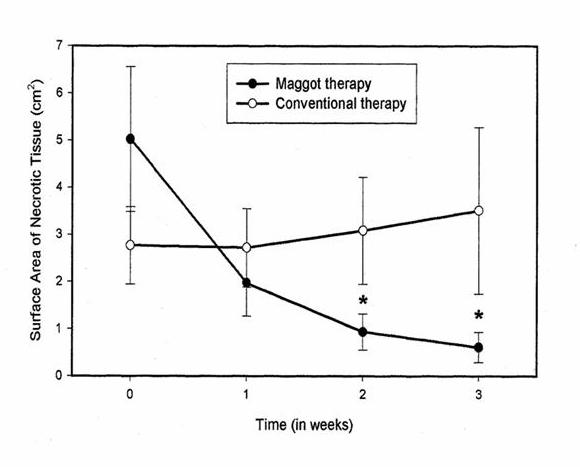 It should be noted the maggots used in these studies were the same species and strain, from the same culture line, as the breeding stock used now for Medical Maggots™ by Monarch Labs.

Current status of maggot therapyIn 1995, only a handful of doctors were using MDT. By 2004, on the basis of clinical and laboratory data like that described above, the U.S. Food and Drug Administration (FDA) cleared Medical Maggots brand of maggots for marketing in the U.S., for the purpose of debriding chronic wounds such as pressure ulcers, venous stasis ulcers, neuropathic foot ulcers and non-healing traumatic or post surgical wounds.

Today, any licensed physician in the U.S. can prescribe maggot therapy. World-wide, approximately 50,000 treatments were applied to wounds in 2011.

Biology of flies and maggots

Maggots are fly larvae, or immature flies, just as caterpillars are butterfly or moth larvae. A diagram of the life cycle of flies and maggots appears below (used with permission of the BTER Foundation).

Those flies whose larvae feed on dead animals will sometimes lay their eggs on the dead parts (necrotic or gangrenous tissue) of living animals. When maggots are infesting live animals, that condition is called "myiasis." Some of those maggots will feed only on dead tissue, some only on live tissue, and some on live or dead tissue. The flies used most often for the purpose of maggot therapy are "blow flies" (Calliphoridae); and the species used most commonly is Phaenicia (=Lucilia) sericata, the green blow fly. Monarch Labs' Medical Maggots™ are a specific strain of P. sericata that was tested for safety and efficacy over the course of 12 years.

This fly has now been managed in pure culture for over 22 years.